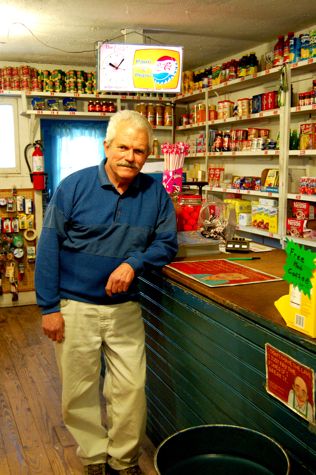 Bill Stockton in his new store from our story earlier this year.

NCL first told you in early March, about Mr. Russell Randolph selling the long time landmark, Randolph’s Grocery, just outside of Schuyler in Eastern Nelson County. Mr. Bill Stockton bought the old store as part of his retirement and return to Virginia. He and his family previously lived in Los Angeles. We featured him last month in our May 2008 issue, page 18.

I was dropping magazines the other day in that part of the county and stopped in just like always, to delivery to Mr. Stockton. I was saddened to find he wasn’t there. The store was strangely quiet. I was met at the door by his son who told me the news. Just a few months after settling into his happy country retirement, Mr. Stockton had a massive stroke about a week ago which has, for the time being, left him unable to operate the store. Thankfully, his fine family is pitching in while he recovers. 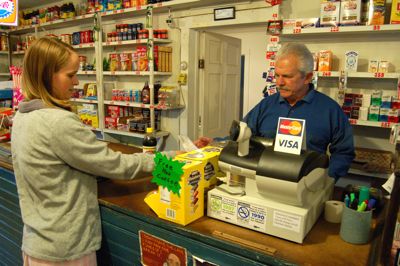 Mr. Stockton waits on a customer back in April of this year,

I like Mr. Stockton, just like I always have Mr. Randolph since I met him. Mr. Randolph had some days of ill health along the way when he owned the store, but the folks living nearby helped him through the rough times until he recovered to once again operate the store. We know folks will do the same for Mr. Stockton and his family as well.

We wish you the best in your recovery Mr. Stockton!