BRL has been able to verify that UVA will soon be locating a new pharmacy in the old Stoney Creek Pharmacy location in Nellysford. While UVA has yet to officially confirm the information, we were able to verify it is happening. We reached out to UVA Health marketing by email on January 21st.

Update with UVA confirmation:
On Wednesday Jan 25th we got the following reply about or inquiry :

“UVA Health is working to bring a pharmacy to Nellysford in the former Stoney Creek Pharmacy. We do not yet have a timetable for opening the pharmacy; we hope to have more details to share in the weeks ahead.”
Eric Swensen
Public Information Officer
UVA Health

Ironically as an aside, apparently some customers that go into Walgreens in Lovingston are being told that location will soon close permanently in late February. 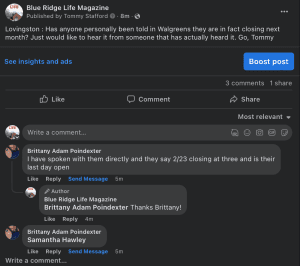 Back in Nellysford, it’s presumed that UVA Health will make a formal announcement with additional details in the days to come.

For years there was a pharmacy along Route 151, in Nellysford, eventually moving to Afton north of Greenfield, then back to Nellysford. Stoney Creek Pharmacy permanently closed in the summer of 2019 after several ownership changes. That left only the Rite Aid Pharmacy in Lovingston that eventually became Walgreens.

We’ll update this story as we have more information.