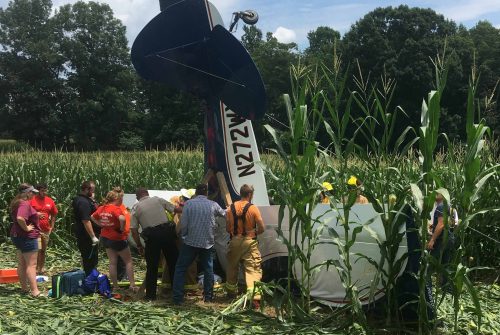 This is an update to our original news alert from our story on July 4, 2017.

An Aviat A-1C-180 aircraft stalled out causing it to crash land in a cornfield in the 100 block of Mountain View Lane. The plane had taken off from a private landing strip on Alcoma Road in Buckingham County and was flying locally when the crash occurred.

The pilot, Justin G. Knight of Midlothian, Va., was flown to UVA Hospital and is being treated for life-threatening injuries. Knight’s 11-year-old son and only passenger suffered minor injuries and was treated at the scene.

The FAA and NTSB have both been notified. The crash remains under investigation at this time.