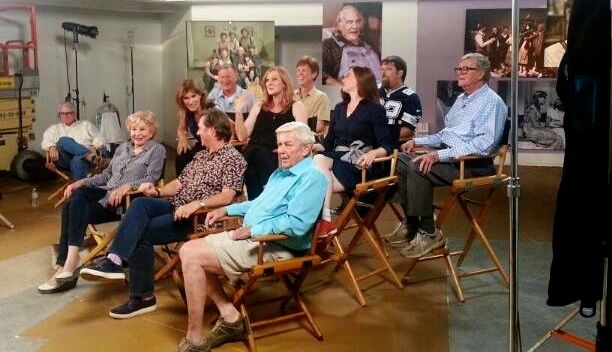 Schuyler
Nelson County, VA
For years and years we’ve been telling you about our friend and native Nelson native, Earl Hamner, Jr of Schuyler. Earl was the creator of The Waltons, a long running, highly successful, television series based on his childhood experiences here in Nelson. It’s rare you get to see the entire cast back together these days. Back in late 2012 many of them reunited for their 40th anniversary of the show. Our Woody Greenberg was there in Los Angeles for the emotional get together.

This past week remaining survivors reassembled again for a network television interview and a print story that will appear next month.

“Get to spend today with my Walton family!! We will be at the studio where the house set is to shoot an Entertainment Weekly magazine picture. The Reunion picture and article will be in their Oct 11 issue.

Good Morning America will also be on set doing behind the scenes video followed by an interview with the cast that will also air the week of Oct 11.
Mark your calendars!!”

We have the calendars marked Eric!

Looking forward to it.