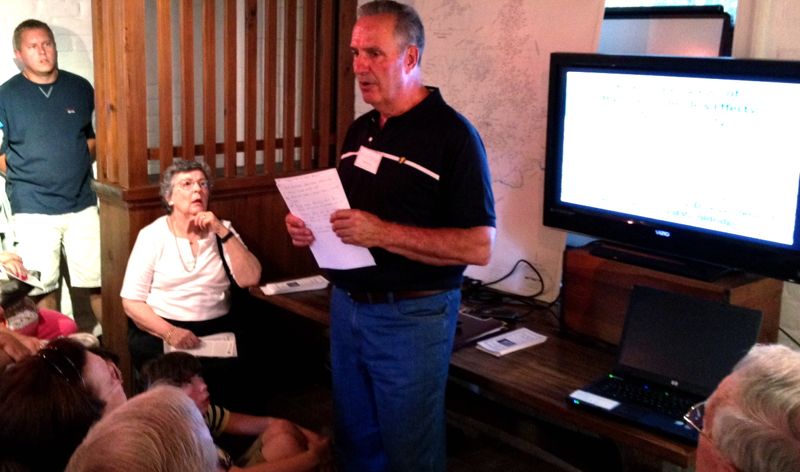 Lovingston / Arrington
Nelson County, VA
We first told you about Rick Becka back in our March 2012 printed edition of Nelson County Life Magazine. NCL found out about Becka’s photos from another person living in neighboring Waynesboro who let us know about them. The rare never before seen slides had been tucked away in a box until our publication. The original slides were donated to the museum earlier this year after Becka sent them to us. This past weekend the photos were part of a program remembering the 43rd anniversary of the killer hurricane.

Our March 2012 story about Richard Becka’s rare find of 43 year old slide photos of Hurricane Camille’s damage in Nelson County, Virginia. Click on the magazine image above to read.

“ The program was especially interesting to people who remember the Camille event as living history,“ said Samantha Embrey, president of Oakland’s Board. “ Rick Becka’s story is compelling. His photos include scenes of partially damaged homes that Oakland volunteers have not been able to identify. We hope people who came to our program will tell us who lived in those houses and tell us their stories.”

During the afternoon, Becka will gave PowerPoint presentations of his long-lost photos.

At the time of Hurricane Camille, Rick Becka had just completed courses at East Tennessee University for his BS degree–both in Meteorology and Geomorphology–under Professor Dr. Don Poole . He was preparing to go the University of Pittsburgh to work on a master’s degree when Poole encouraged him to accompany him to Virginia and study what happened in Nelson County.

The two men arrived in Nelson shortly after the disaster. Even though Becka brought his camera with him, there was little time for study or for photos, as he and Poole offered assistance to many suffering people. They found it rewarding to be able to provide help where it was needed. He has never forgotten the many fine people he came to know in Nelson in those days. As the recovery progressed he was able to take more pictures but what he and Poole saw and experienced for the most part was never captured by them on film. As much as he wanted to pictures full time, it was more important to help people.

When Becka returned to Tennessee he changed his mind about graduate school and joined the U.S. Air Force. He put the photos he took in Nelson away and embarked on a military career that over the years engaged him in other important recovery work. Dr Poole and Becka became lifelong friends and often talked about their adventures in Virginia until Poole’s death five years ago. In 2011 another friend encouraged Becka to look for the pictures he put away in 1969 and Becka was surprised to be able to find them. He gave the photos to Tommy Stafford, editor and publisher of Nelson County Life, who in turn donated them to Oakland’s Camille Resource Center.

Hurricane Camille was the second most powerful hurricane to make landfall in the United States. Prior to reaching Mississippi on August 17, 1969, it passed over the Gulf of Mexico, suctioning up vast amounts of water. After causing historic damage in Mississippi, Camille lost hurricane status. Yet, the storm continued to move north and then eastward across the country, causing heavy rainfall. When it reached Nelson County on the night of August 19-20, it released as much as 27 inches of rain within a six-hour period, causing massive mudslides and flooding. Residents had absolutely no warning of the approach of a storm of such magnitude and, that night, 125 people, about one percent of the population, lost their lives in Nelson County. The storm also destroyed homes, farms and businesses, washed out bridges and roads, and cut off most communication with the outside world.

Members of the community came together and organized—with the help of Civil Defense resources and, eventually, volunteers from around the country—to rescue survivors, locate the dead, provide for the needs of the residents, and restore homes and churches, where possible. Indeed, in the Camille saga, the courage of many residents during the storm and their resourcefulness and energy afterward helped to redeem the destruction and relieve the grief.

The Oakland Museum has a room devoted to telling the story of Camille, and this room was completely renovated, with new displays, for last year’s anniversary event. The upgrades include a new large video screen on which visitors can see a documentary about Camille and, eventually, an animation of the weather phenomena that led to it. There are also listening stations to allow visitors to hear first-hand the stories of tragedy and heroism that marked that event. Available in the database of the Camille Resource Center are hundreds of photographs, videos, newspapers and publications relating the Camille storm that are accessible to the public. The Camille exhibit was funded with grants from the Nelson County Community Fund, the Smyth Foundation, the Charlottesville Area Community Foundation and private donors.
Oakland is located three miles south of Lovingston on U.S. 29 at 5365 Thomas Nelson Highway.

For more information on Oakland’s mission, exhibits and programs go to oakland-museum.org