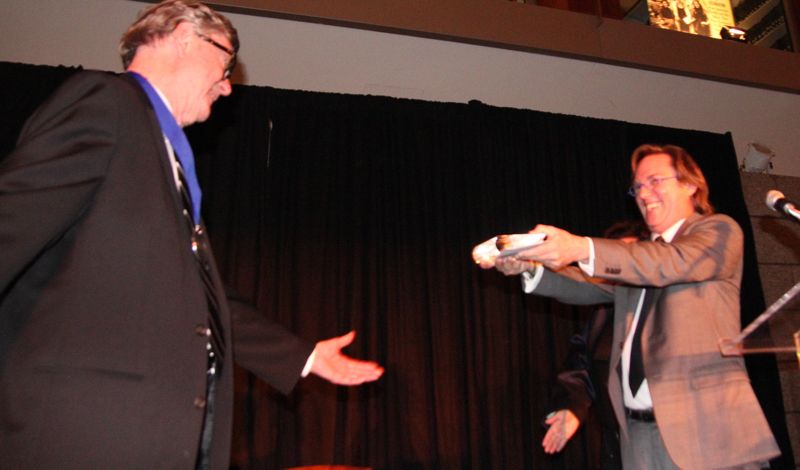 The event was hosted by noted Virginia author Adriana Trigiani, who said she grew up in Big Stone Gap with six brothers and sisters watching “The Waltons”, which was about a similarly sized Virginia family. She said she was inspired by Hamner to become a writer and said other Virginia writers learned a great deal from him.

“Earl taught us how to desribe something, how to tell a story, how to be truthful and was never ashamed to have a big heart,” Triginiani told the overflow crowd, which included best-selling authors David Baldacci and John Casey as well as former Gov. Linwood Holton. She read passages from “Spencer’s Mountain” which was the basis for “The Homecoming” and “The Waltons” tv series.

“Earl is the one person in my life responsible for the success I’ve had,” said Thomas, who has appeared on Broadway numerous times, has directed a number of Shakespearian plays, and has starred in many movies. “With ‘The Waltons’ we got to do not just a tv series but American short stories,” he said, adding that Hamner’s stamp was on every show.

Hamner thanked his brothers and sisters, three of whom were in the audience, Jane, his wife of 57 years as of Oct. 16, and his two children, Caroline and Scott, who also attended. He told several jokes about getting old and ended with a passage from “Spencer’s Mountain” as a teenage Clay-Boy leaves his family to go off to college.

See more pictures that Woody took at Friday night’s reception leading up to the award presentation by clicking here.