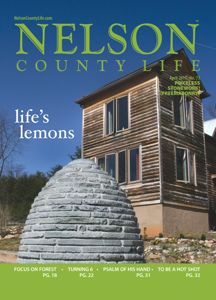 ESTABLISHMENT OF 2011 TAX RATES: Supervisors unanimously adopted the same tax rates as 2010 for 2011:

Ms. Janice Jackson, Nelson’s representative to the JAUNT Board, thanked Supervisors for their past support and requested that they consider in increase of 4% ($2,500) in the coming budget to maintain services.

CONTRACT/COURTHOUSE FURNITURE: Supervisors voted unanimously to authorize staff to award and execute an agreement with Smarter Interiors for the provision and installation of furniture for the new judicial building. Mr. Carter reported that the contract is approximately $145,000. The budget included $175,000 for furniture, a portion of which has already been spent for special furniture for the dispatch center.

Qualified vehicles with an assessed value of $1,000 or less will be eligible for 100% tax relief;

Qualified vehicles with an assessed value of $20,001 or more shall be eligible to receive 54% tax relief only on the first $20,000 of assessed value; and

All other vehicles which do not meet the definition of “qualifying” (business use vehicle, farm use vehicle, motor homes, etc) will not be eligible for any form of tax relief under this program.

*limited local and state revenue growth resulting in total revenue increasing from 1.0% to 1.7% by FY2017;

The FY2012 budget has $253,000 of additional funds programmed to accelerate the “pay down” of the Courthouse financing. Acceleration of that amount each year would decrease the amortization of the Courthouse debt from 38 years to 20 years. The equivalent real estate tax impact of the acceleration would be $0.06 beginning in FY2013 and approximately $0.01 in FY2017.

*Note: Both 3A & 3B are not assumed to be done together. They are alternatives for each other.

Mr. Kooch then presented the estimated debt service for each of the above as well as the estimated real estate tax impact (assuming value of $0.01 equals $270,000) as follows:

Total with Alternative 3A estimates an 8.2¢ tax impact

Total with Alternative 3B estimates a 7.6¢ tax impact

*Still a decrease in Nelson’s portion from $536,946 previous year

JAUNT – increase of $2,557 (4.3%) to maintain current levels of service with additional fuel costs.

CASA (provides volunteers to work with families when children go to court) – new funding of $3,000

After discussion, Supervisors agreed to the following:

Capital Improvements Committee – Mr. Harvey and Mr. Hale made the following recommendations with agreement from the other Supervisors to fund them:

Vehicles – Purchase 3 vehicles for Sheriffs Dept (as budgeted) but only one of two vehicles (trucks) for the Animal Control department.

Solid Waste – Trade in one of the two solid waste roll off trucks & purchase a similar new vehicle ($79,000 estimated cost based on $144,000 for vehicle minus $65,000 trade in value) Maintain budget funding for skid steer equipment at transfer station but defer purchase until near end of FY11-12.

Mr. Bruguiere asked staff to have the Assessors’ prepare a report on progress for the next meeting. They agreed to a budget timeline of: a work session on Thursday, April 21st at 4pm; finalizing proposed budget on Tuesday, May 10th; public hearing on Thursday, May 26th.

REZONING/MR. & MRS. TERRY PARKINS: Mr. Boger reported that the application to rezone the applicants’ approximately 25.481 acres at the intersection of Stonegate Lane and Rockfish Valley Highway from Residential Planned Community (RPC) to Agricultural (A-1) was returned to the Supervisors for reconsideration and public hearing as the adjoining neighbors had not been notified of the application in writing. Mr. Boger said that although the Board of Supervisors is not required to notify adjoining landowners in writing, it has been their practice to do so. He noted that the property has not been subject to Wintergreen covenants and restrictions and Wintergreen Property Owners Association is not required to provide any services to the property. With no public comment, Supervisors approved the rezoning with no conditions.

REAPPORTIONMENT OF ELECTION DISTRICTS: Mr. Phil Payne (County Attorney) reported that redistricting is required based on population changes in each district as identified by the census. He said that the goal is to realign district to have compact and contiguous districts with clearly observable landmarks for boundaries while preserving communities of interest. Mr. Payne said that the proposed district lines do not split census blocks and have observable boundaries. He noted that the process is on a high-speed schedule since Virginia has elections this year.

Ms. Susan Rorrer presented the proposed map, noting that the ideal population for each district (based on census information) is 3,004. She said that the South and Central districts grew more than the East and West districts so population had to be shifted to equalize the districts. She noted that the North district did not have to be changed. The proposed redistricting gives each district the following populations: South 3,091; East 3,019; West 3,026; Central 2,922; and North 2,962. The new alignment for the West District follows Rt. 151 across Brent’s Mountain and then follows Beech Grove Road up to Cub Creek Road. The new alignment for the East District follows the major power transmission line.

With no public comment, Supervisors voted unanimously to adopt the proposed redistricting. Ms. Brennan said that she did not want to lose any of her constituents along Beech Grove Road but could find no other way to transfer population. Mr. Johnson said that he was not happy about losing Fostertown but that it made no sense to move the residents along Tye River at the north end of the county have to cross Rt. 29 to the West District and the state’s redistricting plan would have made that even more difficult. Mr. Hale said that, while elected by districts, Supervisors serve the entire county.

MS. LESLIE HATFIELD, Faber, asked Supervisors to reconsider adopting a confinement ordinance. She said that a family member in her neighborhood has had a run-in with aggressive dogs. She said that she has three children who are afraid to play outside because of the dogs. Ms. Hatfield said that a rural county can make an exception to the ordinance for hunting dogs during a legal hunt and that Nelson Animal Control supports the adoption of an ordinance. She also said that no one is saying dogs should be tied up as there are many ways of confining a dog to your property.

MR. GLENN PHILLIPS, Faber, said that he supports an ordinance as he has been penned and bitten by dogs roaming. He said that an ordinance does not affect legitimate hunters but that there is a problem with dogs running in packs in the county.

MR. JASON HATFIELD, Faber, said that he is in support of a confinement/running-at-large ordinance, especially to help the disabled, handicapped and children who are unable to fight off a dog attack. He said that an ordinance would protect people and dogs and be mutually beneficial to both.

MS. CAROL HATFIELD, Faber, said that it is terrifying to have dogs go after your child and asked for the Supervisors’ help.

Courthouse Project – Project turn over may occur sooner, but full occupancy is expected June or July;

Broadband Project – Four proposals received in response RFP for Network Operation services and under review; Issuance of an RFP to retain construction services for the fiber optic network is planned for this week;

Blue Ridge Tunnel Project – Waiting for input from owner of the trailhead property on proceeding with completion of the easement acquisition;

Region 2000 Regional Water Supply Plan – Supervisors will receive a presentation on the plan with information on local approvals within the next 90 days;

Towers – Construction of the tower at the Courthouse complex began on April 11th with estimated completion time being approximately 6 weeks (paving of the upper parking lot is pending completion of installation of this tower); Issuance of an RFP for construction of the Devils Knob Tower is expected the week of April 18th.

Meeting continued to Thursday, April 21st at 4:00pm for a Budget Work Session.