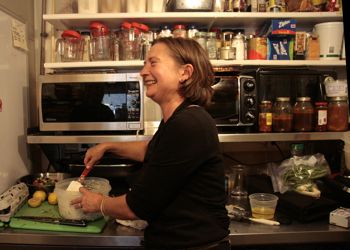 We love the folks down at Basic Necessities. Very nice of Hawes Spencer over at The Hook to mention them!

Basic Necessities in Nellysford is part of the local slow food revolution. Now owners Kay Pfaltz, Keith Dix, and Bev Lacey have upped the ante by hiring one of the area’s original slow-fooders, Chef Gail Hobbs Page, who’ll be guest-chefing at the little Nelson County eatery several nights a week.

“Gail is one of Charlottesville’s original ‘localvores’,” says Pfaltz. “For the past 12 years, she’s been a leader in our Eat-Local movement. She passionately embraces the philosophy that if it can be trucked in from somewhere else, it can be produced right here in Central Virginia!”

The idea is that locally produced food– produced within a 100-mile radius of where you live– is the complete package when it comes to eating healthy, protecting the environment, and taking a stand against the corporate, government-subsidized farm industry. (Unfortunately, it appears the government is taking its own stand against local foodies. Recently, local farmers Richard Bean and Jean Rinaldi were arrested for mislabeling their pork products. Perhaps that’s why so many refer to the movement as a revolution.)

Page was recently featured on the PBS series Endless Feast, which focused on chefs across the country who “cook locally.” She also owns Caromont Farmstead Chevre and makes goat cheese with milk from her herd of 60 Nubians, Alpines, and La Manchas in southern Albemarle.

Pfaltz, a writer who teaches in Mary Baldwin’s adult degree program and leads food, wine, and literature tours to France, opened Basic Necessities in 1997 with her partner, Judy Nelson (yes, of Martina Navratilova fame) after living in Paris for 10 years.

“We try to stay far away from factory farmed meats and the big food companies such as US Foods, Sysco, and the like,” she says.

Pfaltz describes the atmosphere as provenÃ§al or Mediterranean. With only six tables out back on a screened porch, and a working fireplace in the winter, it could also be described as a unique, cozy little getaway.

“We’re small, casual, and kind of funky,” she says.