Photography by Tommy Stafford
For www.NelsonCountyLife.com : Â© 2007
Fall Colors on the BRP
Near Love, Virginia 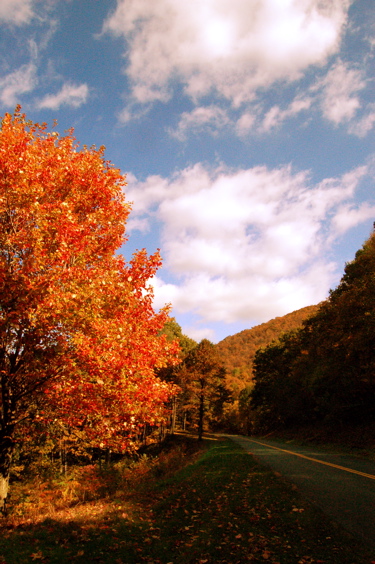 Wednesday was another warm one in Virginia. Though we saw some thin clouds move in by dark, the bulk of the day was dry and warm. If we don’t get rain sometime today before midnight, we will break a record in portions of NOVA near DC for the most consecutive days without rainfall. The old record dates back to 1871 – 137 years ago! That’s almost as old as me! I do think we’ll actually see some rain in the area somewhere before midnight tonight. Conditions are changing and becoming better for rain, particularly as we head into tonight and Friday.

As hot and dry as it is, Fall is trying to make some kind of appearance especially up on the BRP where there is some color…. if the leaves aren’t simply dropping off from being so dry. Hopefully we’ll see some rain over the next 48 hours to at least end fall on a positive note as we head toward winter in the coming weeks.

The Storm Prediction Center continues to show the potential for severe weather on Friday. A warm front will push through area as a cold front works toward us, that could set the stage for a severe weather outbreak in the Atlantic region on Friday. Here’s a little of what the storm prediction center is saying:

WRN SLOPES OF THE APPALACHIANS TO THE ATLANTIC COAST…
WIDESPREAD SHOWERS AND THUNDERSTORMS — FROM THE GREAT LAKES SWD TO
THE GULF OF MEXICO — ARE FORECAST TO BE ONGOING AT THE START OF THE
PERIOD…ALONG AND AHEAD OF SURFACE FRONT. EXTENSIVE CLOUD COVER
AND PRECIPITATION SHOULD LIMIT POTENTIAL FOR AIRMASS DESTABILIZATION
THROUGH THE DAY…DESPITE MOIST BOUNDARY LAYER.

WHILE LACK OF INSTABILITY SHOULD ACT TO LIMIT STORM INTENSITY TO
SOME DEGREE… WITH SHEAR ACTING TO
ENHANCE/SUSTAIN ORGANIZED STORMS — INCLUDING SMALL-SCALE LINES/BOWS (fast moving lines of storms with strong winds)
AND SOME SUPERCELLS…EXPECT FAIRLY WIDESPREAD SEVERE WEATHER
COVERAGE. MAIN SEVERE THREAT WILL LIKELY BE DAMAGING WINDS…THOUGH
A COUPLE OF TORNADOES WILL ALSO BE POSSIBLE. HAIL SHOULD BE A
LESSER THREAT IN GENERAL ……….

On the National Forecast Map, high pressure that’s been controlling our weather for the past week has moved to the east out into the Atlantic. A warm front will move north through the area over the next several hours with a cold front sweeping through Friday evening. The clash of the two air masses may set off some severe weather with an isolated tornado possible, though better chances are north toward PA.

*Tonight Mostly cloudy scattered showers then thunderstorms after midnight across 40% of the area. Fog developing before morning.
*Lows valley near: 58Â°
*On the mountains: 55Â°
*Winds: S 5-10 MPH with higher gusts to 20 by morning