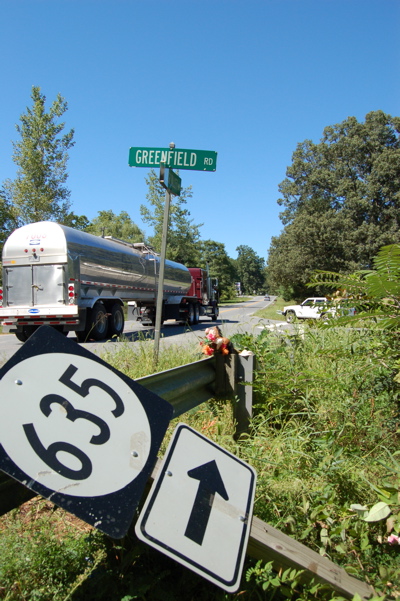 The 151 & 635 intersection where Laura, Iliana, and Elschen were killed last Thursday.

I saw a man I’ve known for years lose it the other day. I sat with him Friday as he cried uncontrollably over the sudden death of Laura Cavedo and her daughters, Elschen and Iliana Strickler. Just days before the accident, she had closed on a new home. The kids were excited about picking paint colors for their new rooms. Mom was tickled over the notion she’d now have a dishwasher. It is Labor Day weekend and that house sits empty.

According to an initial report by Virginia State Police, Laura and her two girls were rear ended by a box truck traveling south on Rt. 151 while trying to turn left onto Greenfield Road. The impact pushed Laura’s car into the opposing lane where the vehicle was struck by an oncoming van. The girls died instantly. Their mother joined them about an hour later.

Three people killed, just like that. A mother and her two girls.

So we ask ourselves, why? Why them? Why now?

I think the reason why we Nelsonians feel so shaken by this accident, regardless of whether we knew the victims, is because we know one thing to be true: It could have been us.

Time and distance, both of which we know are related, influence perspective and perhaps perspective and objectivity are in short supply when it comes to this event. Mere minutes and yards separated myself and my wife from Laura’s fate. So yes, my views of the incident may seem distorted, myopic at best. Even so, I think most of us can agree that something must be done.

Once a peaceful country road, Rt. 151 has become a popular shortcut for tractor trailers traveling down I-64 headed to U.S. 29. They say the route shaves time. But at what cost?

151 was never designed to handle the traffic it does today. Locals have told us they have pleaded with VDOT and the county to regulate prohibited rigs along 151 but nothing ever happens. Why? For one, 151 as it exists today has VDOT’s blessing. According to the agency, the road meets all the requirements for long haul truck traffic and speeds are in accordance with this type of highway.

If 151 is an appropriate cut-through for long haul truck traffic moving at the current speeds then VDOT administrators are either severely out of touch, lack common sense, or both.

To be clear, the truck that slammed into Laura’s car was not a long haul truck. But imagine if it was.

I got a call Friday evening from Tim Spicer, the operations manager for Tiger Fuel in Lovingston. “Tommy, something must be done about this,” he told me with a tone so serious, it startled me at first. “This can’t stand any longer.”

Tim lives in Western Albemarle and travels 151 on his way to work in Lovginston each morning. Even though his company uses long haul trucks in its daily business, Tim knows that from a practical standpoint, semi trucks traveling through Nelson — those not making local deliveries — have no business being on Rt. 151. It’s a safety issue. It’s common sense.

We are not asking the state to enact an all-out ban on trucks on 151. Many of us here in Nelson make our living hauling gravel, produce, building materials and the like in and around the county. At a minimum, authorites should begin enforcing the existing laws put in place to make 151 a safe road to travel. Enforce the speed limit. Pull over and fine over length trucks. And let’s begin the discussion about putting in turn lanes at Greenfield Road and other dangerous intersections along the highway.

We are told that VDOT’s long-term plan is to widen 151. But that will only make 151 more trafficked and more accident-prone. Building a bigger highway would change Nelson County and it’s a bad idea.

The safety of 151 was a hot topic at Saturday morning’s RVCC pancake breakfast. A petition circulated at the Nelson Farmers’ Market by local potter Deborah Harkrader seeking a remedy to dangerous traffic patterns on 151 had generated at least 100 signatures by mid-morning, including ours. The good news is we’re talking. Our local authorities now need to listen and this is their chance to act.

Meanwhile, I have been in contact with network and cable news outlets I worked with in the past. What happened Thursday afternoon is news worthy not because “Trucks are Bad” or because 151 is a “Scary Rural Highway”. This is a story because deep inside, we all knew there would one day be a wreck like this on 151, one that would wipe out a family and finally make us mad enough to address the road’s dangerous traffic patterns.

We’ve lost a mother and her two girls for heaven’s sake.

The comments section for this post is open and we welcome discussion.