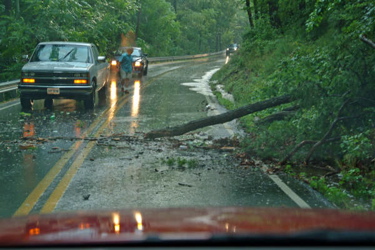 Near Shipman, Virginia along Route 56 – This is just one of the many trees along with power lines down in that part of the county. 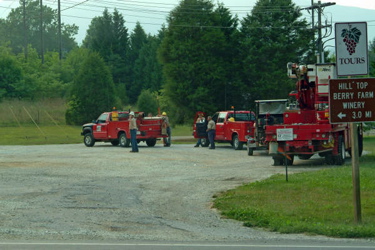 As many of you know portions of Nelson were hit with some very intense thunderstorms this afternoon around 4PM. Most people never saw a drop of rain, but where the isolated storms developed they were strong. The lightning was very intense, I know, we were up in a helicopter getting ready to land as the storms approached.

We just got power back here in Greenfield after 2-3 hours without it.

This is a biref update with more updates later tonight and Tuesday.

As of 7:09 PM most of the western sections of the county are back with power. Wintergreen, Nellysford, Afton, etc. However, many sections south and east of 29 toward Lovingston do not have power. Some trees are down in the Shipman area and power lines are down there as well. We understand the communications center at the sheriff’s office is having limited telephone service as well.

Though very isolated, the storms have caused a great deal of problem in that part of the county.

More updates as we have them.
-T-