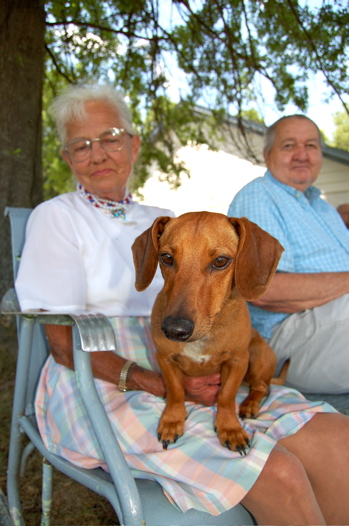 Summer doesn’t officially begin until later this week, but you can’t tell the cute dog above that. He found a cool spot in the shade right in the lap of this lady enjoying a nice day at Johnson’s Senior Home in Roseland. For the first part of this week you’ll need plenty of shade as the temps will be hot today. Yesterday we reached an afternoon high of 90 degrees at 3:20 PM here in Greenfield at NCL-Nelson County LIfe Magazine. Upon the mountain at NCL-Wintergreen Nature Foundation they reached a Sunday high of 81 degrees around 1PM. We’ll see another hot day today & Tuesday but showers and storms move in Tuesday afternoon and evening moderating the temperatures for the remainder of the week.

On the National Forecast Map, by afternoon high pressure still remains in control but a cold front begins approaching the area overnight and increases chances for storms in the afternoon Tuesday. A stray afternoon thunderstorm is possible late this afternoon with daytime heating, but most people will stay dry and not see any rain.
Today’s Forecast Map

*Today Mostly sunny this morning, with partly cloudy skies in the afternoon. Very isolated thunderstorms possible in about 20% of the area by late afternoon.
*High temps in Roseland, Lovingston and Faber 93 degrees.
*On the mountains above 2000 feet along the BRP, Wintergreen, Humpback Rocks, Devil’s Knob, and Montebello, sunny in the morning, partly cloudy in the afternoon with very isolated t-storms late afternoon. Highs top out around 84 degrees. Winds W-5 MPH.

*Tonight any remaining isolated thunderstorms ending shortly after dark then partly cloudy. Patchy fog in any areas that get showers.
*Lows valley 64 degrees.
*On the mountains overnight mild, lows of about 64 as well.
*Winds S-5 MPH.

Wednesday partly cloudy in the morning, cooler. Highs around 85 valley around 73 mountains. Overnight lows generally in the mid60’s for the first part of the week, cooling to the upper 50’s by Wednesday night.

The remainder of the week looks generally dry with partly to mostly sunny skies by week’s end and temperatures in the mid 80’s with overnight lows in the mid and upper 50’s.