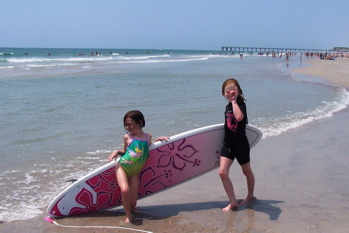 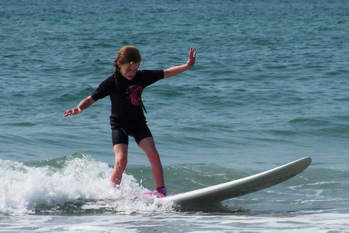 Wednesday was pretty much a day to head out to the beach just like this one in Nelson County near Beech Grove. The surf was up and the Stone kids from Rhue Hollow had a great time. Okay, maybe it wasn’t a beach here in Nelson, but they all are from Nelson! These are a couple of shots Jeff & Tam Stone, owners of Wintergreen Winery, sent our way last night of their girls having a big time at Wrightsville Beach, NC.

On Wednesday less of us saw the showers than we did on Tuesday. A couple of heavy, near severe storms did develop yesterday in Augusta, but they never moved into Nelson. Around 10 PM last night we did have a cluster of thunderstorms form in the eastern sections of the county pretty much from 29 east. Bo Holland told us she had very heavy rain on Duncan Hollow Rd with a lot of the ditches washed out. David Brooks over at Shipman tells us he got about 1.5 inches of rain over at Shipman. Here at NCL-Nelson County Life Magazine in Greenfield we didn’t get anything in the bucket by midnight. On the mountain at NCL-Wintergreen Nature Fountadion @ Devil’s Knob, the rain gauge picked just 02″ inches of rain by midnight. Head toward NCL-Tiger Fuel in Lovingston, and they picked the same with 02″ inches of rain. Ironically they got that before last night and it didn’t get in the gauge suring the late night storms. You can see other rain totals across the county by clicking here.

On the current surface map high pressure to our north will have to take a back seat for a couple more days before it finally brings us partly sunny skies and warming temps. Today we’ll see lots of clouds and very cool temps due to lack of sunshine. We will struggle to make 70 degrees for a high today.
Current-Sat Surface Map

On the National Forecast Map, moisture left from overnight thunderstorms and a moist layer of clouds moving in from the Atlantic continues to keep us with a chance of showers today. Can’t rule out a stray thunderstorm in the far southern regions but we are pretty much locked into clouds, cool temps and showers. SW Virginia has a chance to see stronger storms where they will see more sunshine. I am seeing the cloud line sneek close to Central Virginia on this morning’s local satellite image. Much of West Virginia is seeing ample sunshine this morning. High pressure is trying to work in, but the clouds moving in from the E and NE will give it a tough battle.
Today’s Forecast Map

*Today Mostly cloudy & cool with passing showers from time to time. Patchy fog early, with isolated showers in the morning an isolated thundershower possible in the late afternoon for about 40% of the area.
*High temps in Faber, Martin’s Store, and Piney River upper 60’s to around 70 degrees.
*On the mountains above 2000 feet along the BRP, Wintergreen, Three Ridges, Devil’s Knob, and Montebello, mostly cloudy with scattered afternoon thunderstorms. Highs top out around 63 degrees. Winds E 5-10.

Have a great Thurs!