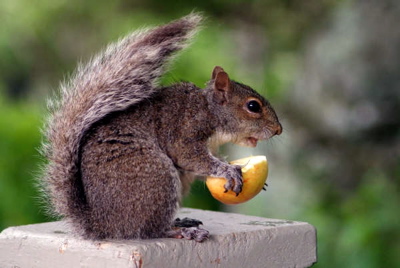 Tuesday started out much like today will, a bit of fog burning off by mid-morning, then thunderstorms in the afternoon. But between showers and thunderstorms our photographer extraordinaire, Paul Purpura who lives year round on the mountain, grabbed this shot of a squirrel having an afternoon snack! Sammy the squirrel will have to eat between storms again this afternoon.

Many of us saw much needed showers and thunderstorms throughout the afternoon Tuesday. Here at NCL-Nelson County Life Magazine in Greenfield we picked up .20″ of rain with an afternoon high of 84 degrees. On the mountain at NCL-Wintergreen Nature Fountadion @ Devil’s Knob, the rain gauge picked up a tenth of an inch, with an afternoon high of 78 degrees. A degree cooler than Monday. At NCL-Tiger Fuel in Lovingston, they picked up a thrid of an inch of rain with an afternoon high of 84 degrees. You can view other rain totals across the county by clicking here. Weather stations at Delfosse Winery and Wintergreen Winery are still out. One due to lightning and the other due to a computer problem at Wintergreen Winery. We’re working to get both resolved. Soon there will be another station in the vicinity of Beech Grove so there will be an alternate station to check in there area.

On the current surface map below, high pressure to the north continues to pull down milder air. The area across Central Virginia and Nelson County remains very moist and will become unstable again as the day progresses. This will allow thunderstorm development.
Current-Sat Surface Map

On the National Forecast Map, moisture left from overnight thunderstorms will help refire storms today. Some of these storms will become severe as the day wears on.
Today’s Forecast Map

*Tonight numerous thunderstorms over 60% of the area, becoming isolated after midnight, dense fog in areas where it rains.
*Lows valley 50 degrees.
*On the mountains overnight low of 53.
*Winds E 5-10 MPH.

Have a great Wed!