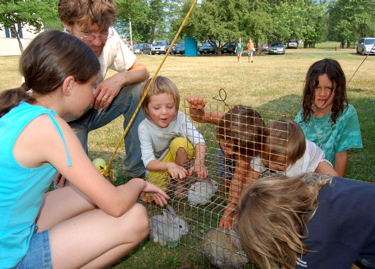 Half of the weekend was great. Saturday was sunny and beautiful. Above you can see how much fun these kids had petting rabbits at the market. We’ll have lots more of this weekend’s happenings later today. Be sure to check back in. By Sunday the remnents of old tropical storm Barry gave Nelson and Central Virginia a well deserved day of a nice slow soaking rainfall. We’ll still see some lingering clouds early today as the low pressure system, formerly Barry, pulls away to the NE and up the eastern seaboard. Some stray light showers may stick around this morning and we may see some scatered thunderstorms this afternoon / evening.

Rainfall amounts were not heavy across the area, but we did get a good soaking at most places. Here at NCL-Nelson County Life Magazine we picked up about .60″ of rain before midnight last night. At NCL-Tiger Fuel in Lovingston they reported .61 inches of rain on Sunday. Upon the Devil’s Knob Mountain at NCL-Wintergreen Nature Foundation they reported .71″ of rain just before midnight Sunday evening. This is an incomplete report from TWNF since they were offline a big part of Sunday morning until their computer was rebooted. They probably had more like 1.50″ of rain from the look of other gauges nearby. NCL-Delfosse Winery just off of Hickory Creek in Faber only showed .04″ in the gauge. I just don’t think that’s right. Something must be blocking their gauge. Because…Just up Route 29 about 5 miles at affiliate station The Covesville Store, they had 1.18″ in the gauge, so I am pretty sure there is something going on with the Delfosse gauge. If not, they totally missed out on the rain! Generally speaking everyone topped out with afternoon highs around 70 degrees except on the mountain where they reached a high of 60 degrees. You can see other area rainfalll totals by visiting The Automated Flood
Warning System for Nelson.

On the current surface map below, the low pulls NE and most of the rain with it. A trough (weak disturbance) will be in the area by tonight in advance of a front making it’s way toward us. That will allow for the development of some scattered storms if we get enough sunshine peaking out.
Current-Sat Surface Map

Below, on the National Forecast Map, old Barry scoots up the coast and leaves us. We’ll still have a battle getting the sun started early on, but we’ll see some before day’s end.
Today’s Forecast Map

Today look for clouds and spotty showers this morning with partly sunny skies by afternoon. Temps will be warmer today with some scattered afternoon thunderstorms possible. High temps in Nellysford, Cub Creek, and Arrington 84-86 degrees. On the mountains above 2000 feet along the BRP, Wintergreen, Three Ridges, Devil’s Knob, and Montebello, look for partly sunny skies with isolated thunderstorms in the evening. Highs top out around 75 degrees. Winds will be SW 10-15 MPH. Tonight widely scattered thunderstorms with mostly cloudy skies. Lows valley around 63 degrees. On the mountains overnight lows of about 57. Winds SW 5-10 MPH
Tuesday partly sunny. High 83. On the mountains look for afternoon highs around 74. The rest of the week looks partly to mostly sunny with temps in the 80’s reaching the lower 90’s by next weekend.