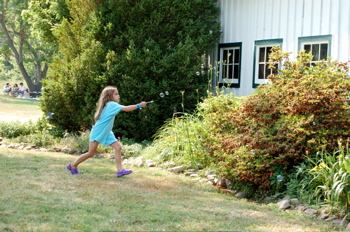 Hope everyone had a great holiday weekend off. The weather cooperated for just about the entire three days. We did see a brief thunderstorm last night here in Greenfield at our NCL office. NCL-Nelson County Life Magazine reached a high of 91 degrees with .06″ inches of rain in the bucket from the storm. We noticed some small hail as the storm worked its way east. Nelson and some surrounding counties were placed under severe thunderstorm warnings later in the day. But no real damage occurred. To our east over at NCL-Delfosse Winery & Vineyard, Claude’s gauge picked up a tad more rain at 08″ and an afternoon high of 89 degrees. Down 29 in Lovingston at NCL-Tiger Fuel Tim Spicer’s gauge had a little over a third of an inch of rain at .36″ The afternoon high in Lovingston was 90 degrees. Due to the power outages in some locations last night our NCL-Wintergreen Nature Foundation site and NCL-Wintergreen Winery are currently offline and I can see the data from them. They will be back up later today.

On the current surface map below, northern high pressure is slowly pushing a weak cold front down toward our area. This morning it’s to our north in the NOVA area. Throughout the day it will slowly slide toward us.
Current-Sat Surface Map

Below, on the National Forecast Map, the cold front mentioned above makes it somewhere near Nelson this afternoon. We’ll still have chances for those afternoon thunderstorms late in day after we get the heating, but they don’t look to have as much severe potential as Monday. Though any storms that form will be slow moving ones, so isolated heavy rains could occur. The northern high pressure eventually wins out in the next day or so bringing slightly drier air to Nelson County.
Today’s Forecast Map

Today look for partly cloudy skies with isolated thunderstorms developing this afternoon. Some storms could produce brief heavy rains. High temps in Faber, Schuyler, and Colleen will be around 86-87 degrees. On the mountains above 2000 feet along the BRP, Wintergreen, and Montebello, look for partly cloudy skies with isolated thunderstorms in the afternoon. Highs top out around 74 degrees. Winds will be NE around 5-10 MPH becoming east, except gusty near thunderstorms. Tonight Thunderstorms die out by midnight and skies becoming partly cloudy. Lows valley around 60 degrees. Again, patchy fog in any areas where rain has fallen. – On the mountains overnight lows of about 60-61 as well. Winds E-5 MPH becoming NE after midnight.

If severe weather does break out, remember to come back here, we’ll have all of the latest watches, warnings and coverage of anything affecting Nelson.