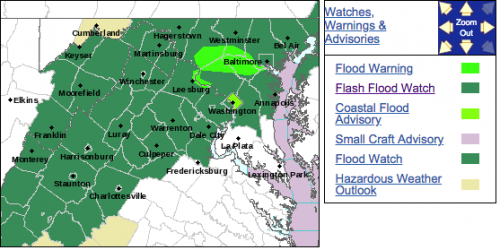 …Flash Flooding Possible Across the Mountains into this Evening…

.A weak cold front will drift south through the area this morning
before stalling across northern North Carolina this afternoon.
Low pressure riding along the front will cause rainfall to
increase over the mountains by this afternoon with locally heavy
downpours possible. This rainfall combined with wet soil
conditions may lead to flooding of creeks and streams especially
west of the Blue Ridge into this evening.

…FLASH FLOOD WATCH IN EFFECT THROUGH THIS EVENING…

The National Weather Service in Blacksburg has issued a

* Moderate to heavy rainfall may result in 1 to locally 3 inches
of rain through this evening. Spotty higher totals are also
possible if embedded heavier showers or thunderstorms occur.

* Already saturated ground combined with the heavy rainfall may
cause creeks and streams to overflow their banks resulting in
flash flooding.

…FLOOD WATCH IN EFFECT FROM THIS EVENING THROUGH LATE TONIGHT…

* From this evening through late tonight

* A wave of low pressure will ride northeast along a stalled
front later today and tonight. Several inches of rain is
possible, and with the ground already saturated, flooding is
possible.