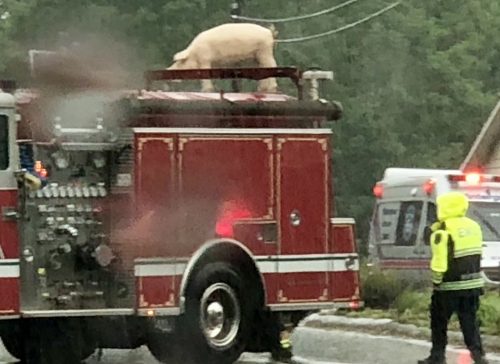 There’s been great concern about the status of the pig that’s on the poll in front of The Blue Ridge Pig in Nellysford. Over the weekend there was a pretty big traffic accident eight in front of the restaurant.

In the photo I shot above, it appeared that the pig was actually on the back of Wintergreen Fire & Rescue’s engine. I didn’t even notice it until someone dropped a comment to us on the photo.

We can see why folks would be concerned, a few years back the pig wasn’t as lucky and took a tumble after a car wreck there took the famous pig to the ground.

Not to worry, the pig is safe and sound these days and is proudly perched on the pole along Route 151!