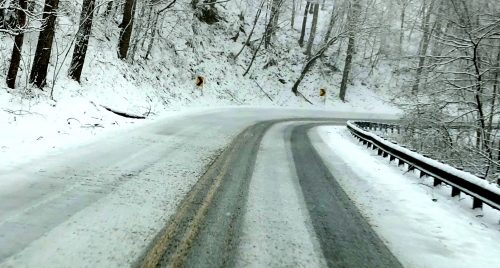 March has kept the promise of coming in like a lion. After a damaging major windstorm at the beginning of the month, it was snow this time as we approached the middle of the month. Schools were canceled for many counties across the area as a result of the winter weather.

By Tommy Stafford : Above, dashcam video of a snow covered Route 151 headed north toward Brent’s Gap.

By far the worst driving conditions were experienced in the Shenandoah Valley side west of the Blue Ridge Parkway. Dozens of accidents were reported throughout the day on I-81. VDOT spent most of the day clearing roads across the region to help improve driving conditions.

Above video from our Facebook live on Monday from Nellysford, Virginia.

Tommy says we will have some cold nights in the short term, but almost spring like weather returns by Sunday and Monday. You can listen to his forecast here.