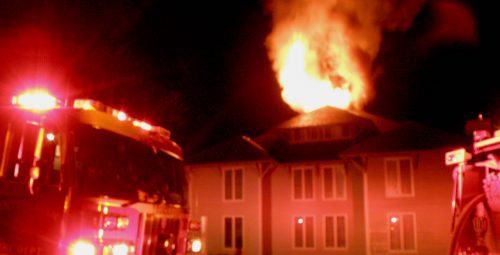 BRL first reported the story, and shared video, of a large fire at the North Ridge Condo unit at Wintergreen in this post Monday night.

“Like any major fire, the cause will be investigated by professional investigators. The investigators arrive tomorrow. There is no indication of foul play.

We’re grateful as always for the assistance we received from our mutual-aid partners. Last night’s response (5-Engines, 1 Ladder, 1 Heavy Squad, 2 Ambulances) is consistent with what you would see in any city for a structure the size of North-Ridge. (Most cities would add a second ladder….but we only have one) What is noteworthy is that our response is on top of a mountain. 2 Engines, the Ladder Truck, Heavy Squad, and one Ambulance were ours, the balance of the equipment had to come from outlying areas in Nelson and Augusta Counties on the valley floor.

While we don’t yet know what caused this fire, we do know fireplaces in the building were in use. As we start into winter, lets let this incident serve as a reminder to have fireplaces professionally inspected and cleaned annually. Of course smoke detectors should be checked as well. Lastly, when in doubt please dial 911.”

The blaze was under control later that evening. Wintergreen Fire Chief Curtis Sheets tells me they are now assessing what may have caused the fire.

North Ridge is a 6 unit condo stack, 2 of those were occupied, but there were no injuries. It does look like the structure is repairable. We had a great effort by everyone that responded.