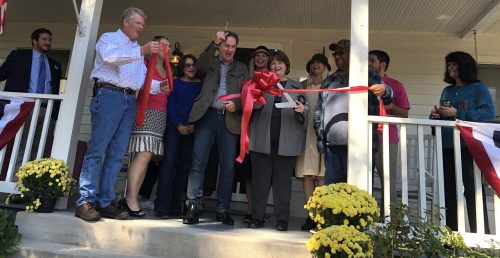 The last time Richard Thomas of The Waltons was in Schuyler, Virginia was back in the early 1970s when the television series was just becoming a sensation. He slipped in and visited with the mother of the late Earl Hamner, Jr. who created the popular long running television series.

Above, Richard Thomas greets fans from the porch of The Waltons Hamner House. It’s the home where the late Earl Hamner, Jr grew up. His childhood experiences there inspired the creation of the television series.

The ribbon cutting kicks off an entire weekend of events in Schuyler featuring Richard Thomas. Click here to see the entire schedule.