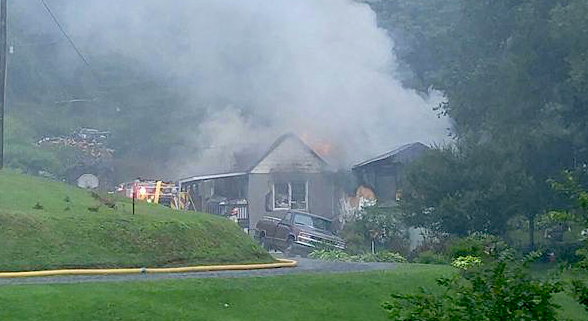 Strong storms that moved through the area Wednesday afternoon and evening are believed to be the cause of a fire that left a family’s house gutted on Brogan Hollow Lane. “It was a total loss,” said friend Natasha Hall. Her son is best friends with one of the family members. Kenny (Wayne) Mays and five other family members spent the night in a hotel provided by the Red Cross, according to Natasha.

The fire has left Mr. Mays and family without a home currently. Their friend Natasha Hall has set up a go fund me account below, and is asking for clothing needs in the posts below.

The line of storms that passed through the area lit up the sky with brilliant lighting. Many people sent images to us or reported the intense storms about the time the home caught on fire.

Nelson: Thanks to Jennifer Amos for this great shot of lightning over Pilot Mountain in Nelson County. @WXReese pic.twitter.com/WilGOtxDdN

According to Tommy’s Weather, similar storms are forecast again today late in the afternoon after the heat and humidity kick in and get them going.