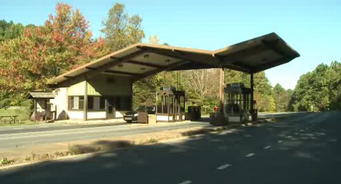 Locals in the area along the BRP confirm they have been able to freely travel the parkway, but amenities such as visitors centers, restrooms, etc were closed.

Around 5:30 pm Tuesday our media partners at CBS-19 forwarded this release to us from the NPS ranger in charge of the BRP:

Government Shutdown Forces Closure of Blue Ridge Parkway Facilities
Asheville, NC – Because of the shutdown of the federal government caused by the lapse in appropriations, the National Park Service (NPS) has closed all 401 national park units, including the Blue Ridge Parkway. All visitor facilities including all NPS Visitor Centers, historic sites, park hotels, restaurants, campgrounds, picnic areas and restrooms – except for the main motor road, a thru way – are closed. These park facilities will remain closed until the government reopens.
Chief Ranger Stinnett said that park visitors in all overnight campgrounds and lodges will be given until 6 p.m. Eastern Daylight Time on Thursday, October 3 to make travel arrangements and leave the park. In addition, all park programs and special events have been canceled.
The Blue Ridge Parkway hosts approximately 70,000 visitors on average each day in October; nationally, more than 715,000 visitors a day frequent the National Park System. Nationwide the NPS stands to lose approximately $450,000 per day in lost revenue from fees collected at entry stations and fees paid for in-park activities such as cave tours, boat rides and camping. Gateway communities across the country see about $76 million per day in total sales from visitor spending that is lost during a government shutdown.
At the Blue Ridge Parkway, 195 National Park Service employees are on furlough because of the shutdown and approximately 200 concessions’ employees are similarly affected. 43 National Park Service employees remain on duty, providing law enforcement, security and emergency services.
Nationwide the shutdown has also furloughed more than 20,000 National Park Service employees; approximately 3,000 employees remain on duty to ensure essential health, safety, and security functions at parks and facilities. About 12,000 park concessions employees are also affected.
Because it will not be maintained, the National Park Service website will be down for the duration of the shutdown. NPS.gov has more than 750,000 pages and 91 million unique visitors each year.

NPS Shutdown on the web: http://www.nps.gov/shutdown/index.html