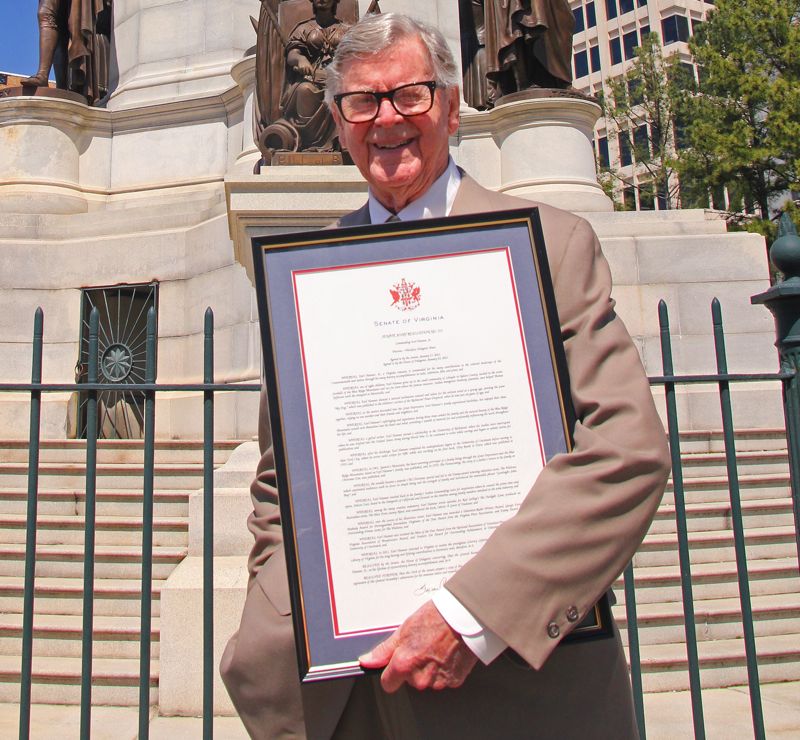 Richmond, Virginia
By Woody Greenberg
For Waltons International Fan Club President Carolyn Grinnell, seeing Earl Hamner standing in the well of the Virginia Senate to receive the plaudits of the nation’s oldest legislature “brought tears to my eyes.”

Hamner, 89, was recognized for both his literary achievements – “Spencer’s Mountain,” “Fifty Roads to Town,” – and his television successes – “The Homecoming,” “The Waltons,” “Falcon Crest” – and having put the state of Virginia in a very favorable light before national audiences. 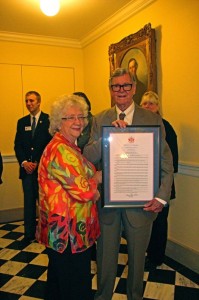 The Senate proclamation was the latest in a long string of honors for the Nelson County native stretching back to the early 1970s when “The Homecoming” and then “The Waltons” drew millions of viewers entranced by the stories of a Virginia family struggling through the depths of The Great Depression and later World War II.

Hamner based the characters on “The Waltons” on his own family. His sister Nancy and her husband Garnett Jamerson, and brother Paul beamed proudly from the Senate gallery as Senate President Lt. Gov. Bill Bolling praised Hamner, saying “The Waltons” became “a piece of Americana that captivated the audience,” and called Hamner’s achievements “truly remarkable.”
Also on hand were Hamner’s wife Jane, his son Scott and his daughter Caroline as well as other relatives and friends.

Hamner had been honored the night before by the Library of Virginia for having donated his writings – scripts, books, correspondence – to the library. He was interviewed before an audience of 150 well-wishers by former television anchor Lisa Powell.

“Some people said The Waltons’ taught lessons,” Hamner said. “I wasn’t trying to do that but because I wrote about people of character and decency it was interpreted that way.”

Hamner told Blue Ridge Life, “I’m trying to persuade myself that I’m worthy” of the honors he has received. He said he was very glad to see friends from Nelson County in the audience Tuesday night and in the Senate Gallery Wednesday.

Other BRLM stories on Earl Hamner’s proclamation here, and here.