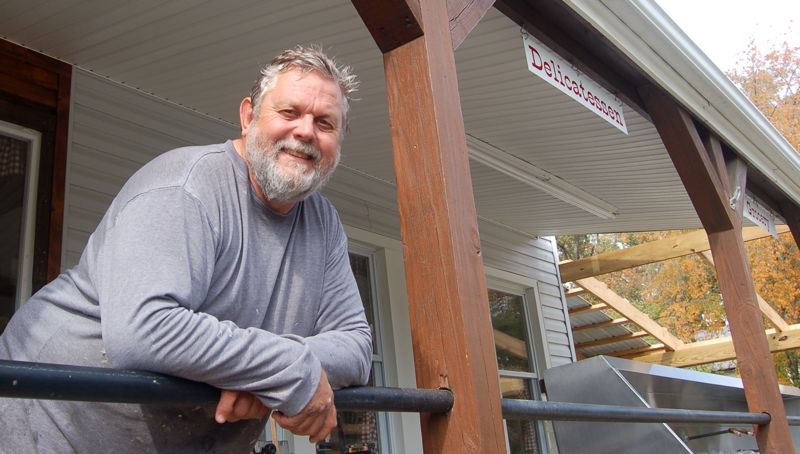 Piney River
Nelson County, VA
Back in April of 2012 we told you about Dale Plummer and his ambitious project of restoring and reopening what was once known as Campbell’s Grocery in Piney River.

Above our April 2012 story (written by Jennie Williams and shot by photographer Hayley Osborne) when Dale Plummer was just getting into the renovation of the old store in Piney River. Click on the magazine image above to read that story.

In just a few days Dale will reopen the store that has a nearly 100 year old history. “We’ll be opening it as Campbell’s General Store. We might be ready to open as soon as this coming weekend. If not, certainly within a few days of that.” Dale says the store was in the Campbell family for about 75 years. Around 2000 Eddie Seaman operated the store for four years. Dale then bought the property in 2004, did some remodeling, and leased it to someone who briefly operated it as the Pinery River General Store. After shutting down after just 9 months the building remained empty until now.

On Monday of this week when we were there, vendors were busy stocking shelves and contractors were busy putting finishing touches on some of the last remaining things to be done. Dale had originally hoped to open back in May, but many delays over the summer months prevented that.

Dale says the store will have just about anything a person will need and hopes to eliminate long drives for his customers. “I have built seven houses out in this area and let me tell you, it’s no fun having to drive an hour or so away to pickup something needed on the job.” With a large selection of hardware, paint, windows and more, Dale hopes he can keeps trips like those to a minimum for his customers.

Dale says they will open as soon as possible (within a few days) but a large grand opening will be held in the next few weeks to officially kick off the opening.

We’ll let you know when!