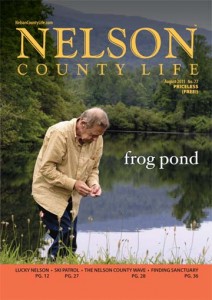 NELSON COUNTY STEWARDSHIP GUIDE – Ms. Karen Firehock with the Green Infrastructure Center and University of Virginia, presented the draft “Health Watersheds, Healthy Communities – The Nelson County Stewardship Guide for Residents, Businesses, Communities and Government.” She noted that the development of the maps and analysis of Nelson’s natural resources were funded by grants. She said that in addition to the guide for the public, the county would receive maps and draft language for consideration in the Comprehensive Plan.

VIRGINIA COOPERATIVE EXTENSION – Mr. Antwan Rose, Nelson County Extension Office, reported to the Board that the state VCE office is planning hire a beef producer specialist for Amherst County that could serve Nelson County if the county were willing to pay a share of salary and benefits package. He noted that the proposed position would serve Amherst County 85% of the time (for 85% of the expense) and Nelson County 15% of the time (for approximately (approximately $3,000 per year). Supervisors voted unanimously to provide the share of expenses for the position.

BROADBAND PROJECT – Supervisors voted unanimously to adopt a resolution authoring staff to award and execute an agreement on behalf of Nelson County with MasTec for the installation of fiber optic cable as a component of the Broadband Infrastructure Project.

LOVINGSTON HEALTH CARE CENTER – Supervisors discussed the proposed closing of the Center and its potential impact on health care and employment in the county. Supervisors then met in closed session with the County Attorney to discuss options. Following the closed session, Supervisors tabled further discussion of this issue and the future of the Health Department Building until their next meeting with updates from staff at that time.

COURTHOUSE/GOVERNMENT CENTER PROJECT – County staff is planning for an October 12th move to the new addition. The planned sequence is: E911 on October 12th; Sheriff’s Department by October 17th; Courts and all other by October 21st. The upper parking lot can be paved at any point as the tower has been completed.

Ms. Brennan had to leave at this point.

HERITAGE CENTER – The Millennium Group has requested that they be added to the Board’s agenda to discuss the groups’ purchase of the Heritage Center. Mr. Johnson and Mr. Bruguiere agreed to meet with the group and make a recommendation to the rest of the Board.

Mr. Hale suggested and the Board agreed to direct staff to develop language to amend the Subdivision Ordinance relative to soils work required on land divisions. Mr. Hale said that it seems clear that the Planning Commission is not going to recommend an amendment and he feels strongly that it is an undue expense.

SUBDIVISION ORDIANCE EXCEPTION/MR. LAWRENCE R. DEWEY, JR. – Mr. Dewey has requested an exception to Section 7-1 of the ordinance requiring a 50-foot wide right-of-way to establish a subdivision road for property located off Lobbans Lane, Rt. 840 in Afton. The applicant states that an exception is requested to deal with an error in a 1973 survey that indicated that there was a 50-foot right-of-way. Mr. Dewey states in his request that he “…wants to obtain my goal of achieving highest value for our property…”

Mr. Dewey said that he understands the rationale behind the Planning Commission’s recommended denial but he wants to create the least amount of disturbance possible for the adjoining landowner, the Kerbys.

During the Public Hearing, Ms. Tammy Hahn who owns two adjacent parcels to Mr. Dewey, objected to the widening of the right-of-way road across her parcel. She said that the land is already steep with runoff problems.

Ms. Denise Tuso, Lobbans Lane, asked how the Board could approve the exception when they have no idea what will be developed there and what the potential is for a whole lot of traffic on that road.

Ms. Peggy Nunnery, also on Lobbans Lane, also expressed concerns about increasing traffic on the road and opposed any further development of the parcel.

Mr. George Staton, Lobbans Lane, expressed opposition to the exception and any further development, noting the runoff issues already a problem on Lobbans Lane. He said that he would not want the increased traffic either.

Mr. James Turbin, Lobbans Lane, said that runoff would be a problem from the pond.

Supervisors voted 5-0 to deny the exception, following the Planning Commission’s recommendation. Mr. Hale noted that it is not the job of the county to correct surveys, which can only be certified in a court of law.

ARTICLE 2 DEFINITIONS: The following definition is added to this Article:

2. ARTICLE 3, CONSERVATION DISTRICT ,C-l; Section 3-I-a Uses-Permitted by Special Use Permit only, subsection 3-1-17a is amended to as follows:

3. Article 4, AGRICULTURAL DISTRICT, A-I; Section 4-I-a Uses-Permitted by Special Use Permit only, Subsection 4-1-43a is amended as follows:

PROPOSED AMENDMENT TO THE CODE OF NELSON COUNTY, CHAPTER 4, BUILDINGS SECTION 4-33 TO 4-42 ESTABLISHMENT OF LOCAL BOARD OF BUILDING CODE APPEALS – Supervisors considered an amendment to the code to officially establish a Board of Building Code Appeals, detailing terms, responsibilities and compensation. With no public comment, Supervisors voted unanimously to adopt the proposed amendment.

Thanks to Rural Nelson for sharing their minutes with NCL. Click on their link below to learn more about them.