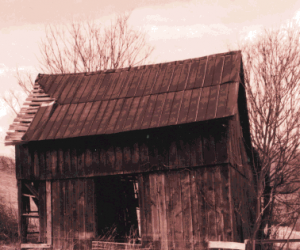 The country life of the 40s is almost completely gone. Much of
of smaller farms where many households made their living with
hard working folks and they made it because they were frugal in
for tobacco, their money crop. These folks had just survived the
eat because they had grown most of their necessities for
themselves with big gardens, their farm animals, and a small
field of wheat which they saved for flour.

Irish potatoes were the real mainstay for the supper table, and were
and they were easy to store for winter. The little nubbins, left over
seed for springtime. Each household might harvest ten, fifteen, or
in midsummer. Sweet potatoes, which matured later were also
winter in some cubby hole, just so long as they were stored where
Many homesteads had apple trees. Some stored the apples in their
newspapers and kept them in a bank or pit storage. Others stored
storages near the railroad. Oh, how I remember the distinct sweet
apples were kept.

In 1938, there were 396 growers who stored apples
Yes, some were carried home by the growers
apples, or maybe ‘speedy apple pie,’ that wonderful
combination of brown sugar, cinnamon and butter.
Winesap variety was a favorite because of its long

Gardening and home canning were the mainstays of
food. Most of the gardening was done with a hoe
and a horse pulling the little three pronged cultivator plow. It
morning glory vines would invade the garden overnight and
were the devil to get rid of. The potatoes were lifted up and
swooping “buzzard wing” plow.

As children we learned to eat things that didn’t taste so good to us then, but now they are among our favorites. How many times
did our mothers tell us to go pick a bucket of butter beans and it seemed it took forever to pick them?
Snaps were much easier to pick, they filled the bucket faster, but Mother loved her butter beans. Sweet

But, now I am so glad that Tatum gets her butter beans from the frozen food department at the
supermarket and doesn’t beg me for a garden.

Hog-killing was a cooperative effort with the neighbors, like “apple butter makin,” where everyone
helped each other. There were big tales told of the ‘old days’ and bragging, and everyone expected that!
“I had the biggest hog!” or “You ought to have been with me last night coon hunting…” and by nightfall,
everyone was exhausted. Many had been up before daybreak building the fires for the scalding tub or the
apple butter kettle. Most everyone had hogs that they bought as baby pigs in the spring. Daddy had filled
the corn bin with ear corn for the hogs and horses the preceding fall. Corn was their main feed along
with “Red Dog,” a bran that we mixed in with the slop.

The slop was any of the waste water from the kitchen, no soapy water, but the remnants from the garden,
peelings, and refuse. Nothing was wasted. The Red Dog was poured on top of the slop, and both were
mixed together. The little pigs rooted against each other at the trough for space to eat their supper. The
hog lot usually was located in as shady a spot as possible, a wet spot was ideal for here the pigs could
wallow in the mud. The pigs grew into big creatures; many were in the 300 pound plus category.

It wasn’t all work; the front porches were full of chairs for those wonderful visits from the neighbors who
came sharing their gardens, bringing hand-me-down clothes for Junior, and love that comes only from
sharing. Often there were competitive games of cards; rummy, hearts, and set-back. Some listened to the
radio for news from the war front. The youngsters loved checkers and Papa kept the fly swatter handy.
When peaches were ripe, the word spread quickly, and it was ice cream time! Everybody dipped and
sampled and took turns cranking the ice cream freezer. A precious Saturday night of joy on the farm!

So long for now,
Paul Saunders

Paul Saunders is a 76-year-old native of Nelson County. He has spent all of his life in the county with the exception of the seven years away in college, the Army, and involvement in other agricultural activities. He returned home to Nelson in 1957 with his wife, Tatum, who was a farm girl from Franklin County. Initially he was an active land surveyor in addition to running a peach orchard and boxwood nursery. In 1981, he was bitten by a snake when crawling out of a creek. It was then he decided to become a full time farmer. Now he and four of his sons are partners in an orchard and nursery business near Piney River.

A 1954 graduate of Va. Tech and active in Va. Tech activities, he is past President of the Va. Tech Alumni Association, nationwide. He is the author of a 600+ page history book of his native Nelson County, titled, “Heartbeats of Nelson.” He is a collector and intense student of early rural life artifacts and agricultural machinery. He was the founder and is the coordinator of the National Boxwood Trials which evaluates boxwood cultivar performance over the United States and several foreign countries. He and Tatum were participators in a boxwood expedition to the Republic of Georgia in 2001 searching for new boxwood cultivars.

He is a member of Rose Union Baptist Church, where he served for many years as a Sunday school teacher and is presently a member of the church choir and is a deacon..

He is an avid trout fisherman and loves to rabbit hunt. He and Tatum have seven biological sons, two adopted sons, 30 grandchildren and one great-grandchild.

Saunders Brothers on the web by clicking here.