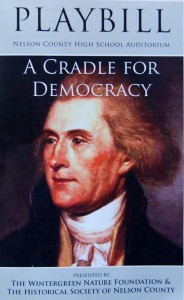 Anti Federalist Jefferson’s presidency ended three years of Federalist rule under Washington and Adams. A Federalist majority in Congress during his first term however made for complications involving issues of Revolutionary War debt, a tenuous relationship with England, and French disruption of trade thru the Port of New Orleans. The birth of the two-party system, issues of Constitution versus commerce over the Louisiana Purchase, and International intrigue made for a volatile political atmosphere both locally and nationally. At the Nelson County High School Auditorium. $20 members, $25 nonmembers. Both performances: $30 members, $35 nonmenbers.