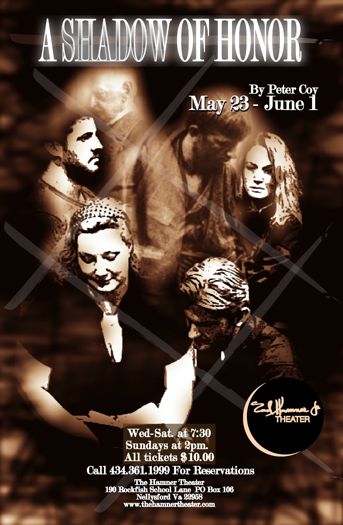 LISTEN TO NCL’S INTERVIEW WITH A SHADOW OF HONOR’S WRITER, PETER COY, BY PRESSING THE BUTTON.

“I did a lot of research and it turns out he was born in 1858. This guy, William Loving, Judge Loving, was a wild man. He was an alcoholic, he was violent, he got in fights all the time, he yelled at people. And I thought, well, why was he like this?” That’s how Hamner Theater, Co-Artistic Director, Peter Coy, describes the main character in A Shadow of Honor currently on stage at the theater inside The Rockfish Valley Community Center in Afton, Virginia.

The idea for the performance was born out of a request from Larry Smith, the artistic director with Wintergreen Performing Arts. Last year he asked Peter if he could include some theater in their arts festival during the summer. “I just read a story about a murder that took place in Nelson County in 1907 that was a nationally covered event. And the trial, also, that followed. I actually remembered the story, it was a pretty interesting, exciting story and I told him the story and he went, â€œOh, thatâ€™s great. Letâ€™s do that- can you write that play?â€ And I said, â€œSure, why not,” continues Peter.

Peter said he wasn’t particularly interested in doing a play with lots of courtroom drama, but more the entire story. “Loving was from either from Nelson County or from Amherst. But, he was living in Nelson County, he was a lawyer, he had been a judge, the County judge. He was, at this point, the estate manager of Oak Ridge Plantation.”

The story set in the early 1900’s involves Judge Loving’s daughter and a murder after she said she was sexually assaulted. The person murdered was the sheriff’s son at the time. “Why the storyâ€™s so interesting is she comes home and says to her father, I was raped. I was drugged. I was given something to drink and I passed out and I donâ€™t know what happened. So then he goes and guns the guy down. Doesnâ€™t ask questions. Just came out and said, I hear you took the girl on a buggy ride.â€ BOOM. BOOM. He cut him in half, or he hit him in the head with the two-blasted shotgun!”

As the play unfolds, the twists and turns of the events following are revealed including the outcome of the trial. 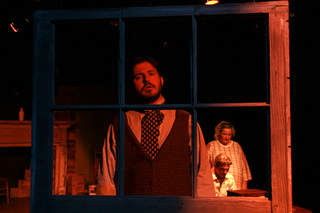 Above, Jonas Collins, Richard Averitt, and Rose Harper in a scene from A Shadow of Honor.
Photo Courtesy of J. Taylor.

At the same time during the play, another parallel story is underway about a person’s father who was in Vietnam and the effect of being there had on him. “So at the beginning of the of the play, in the 1907 story, you find out what happened in the war that caused him to be this kind of wild guy. And so in the end, in the end, at the end of the first act you find out why the kid is so crazy. So you then, so then these things are going back and forth. And then at the end of the story the two stories come together in a way,” adds Peter.

The first performance which began last week, was a complete sellout. Tickets are highly sought after now, but are still available says Nancy Mulrine, the theater’s marketing director. “So far we still have plenty of tickets for the remainder of the run” The play continues until June 1st which will be the last performance.

Since 1987, playwright Coy has written several one-acts, two screenplays, and 25 full-length plays and adaptations. The Hamner staged his adaptation of Earl Hamner’s The Homecoming as its opening production in 2005. His play A House In The Country, won the 2000 Helen Hayes Award for Outstanding New Play produced in Washington, DC, and will be produced as part of the Wintergreen Performing Arts Festival this coming summer.
The cast includes Jonas Collins of Waynesboro as William Ruffin, the character based on Judge Wm Loving. Rebecca Hudnall (Charlottesville) plays his wife Caroline Ruffin and Holly Schumann (Afton) is their daughter Grace, whose actions trigger the killing. Jim Johnston of Nelson County portrays defending attorney Aubrey Strode. Richard Averitt of Nelson County plays Tyler McNeill, the young teacher who grew up facing his Vietnam War veteran father’s trauma. Rose Harper of Nelson County plays his wife Kathy. Hamner Theater Co-Artistic Director Boomie Pedersen directs.

A Shadow of Honor will play Wednesdays – Sundays through June 1. There will be a free Preview Wed, May 21 at 7:30pm. Opening Night performance Friday, May 23 will be followed by a champagne reception with members of the cast and crew. Playwright Peter Coy and director Boomie Pedersen will participate in a talk-back session after the May 30 performance. Tickets are $10, at the door or by reservation at 361-1999. Learn more at www.thehamnertheater. com.