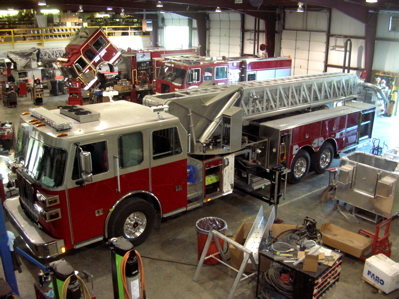 Wintergreen Fire Department is anxiously awaiting the delivery of it’s latest tool to help combat fires in the Wintergreen and Nelson County, Virginia area. WFD Chief Curtis Sheets took the photo above a few days ago at the plant in the state of Ohio where final touches are being made.

“The truck weighs in at just over three quarters of a million dollars. A 95′ platform…..a long overdue addition to fire protection for Wintergreen and Nelson County. This truck can pump 2,000 gallons per minute and will hopefully be responding to calls by July,” Chief Sheets tells NCL.

The new truck could be delivered as early as late June, but Chief Sheets says the training to use the new firetruck is extensive.

The WFD station on top of the mountain has been undergoing extensive remodeling over the past year to accommodate the new truck when it gets here.