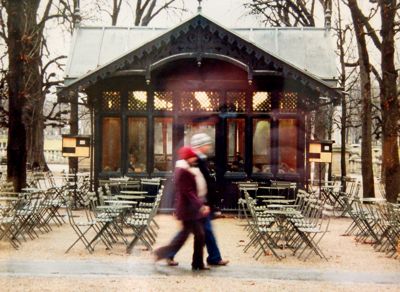 Photography By Ted Pfaltz
One of the many photographs on display at Basic Necessities in Nellysford, Virginia. 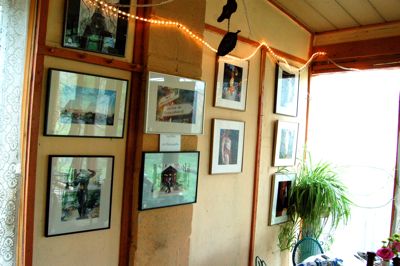 Nellysford, VA – Ted Pfaltz of Albemarle County has an exhibition of unique photographs at Basic Necessities restaurant and gallery on Route 151 in Nellysford, VA. These photographs were taken between 2006 and 2007 in Paris, Dresden, Germany, Tel Aviv and Jerusalem. The large majority of them were shot in Paris.

Pfaltz’s long time love affair with international travel, especially all of France and particularly Paris, has influenced this collection. His efforts to capture the romance and mystery of these locations shows clearly behind the images of modern fashion advertising which are superimposed upon them

The majority of the work is reflective. It builds composition within composition and is intended, among other things, to explore the theme of the contrast between the exalted world of fashion advertising and the femininity therein with the ordinary life of the real person in the street.

Dr. Margaret Flather of nearby Afton says of the exhibition, “These photographs present a unique perspective of the artificial world of fashion superimposed upon examples of everyday culture with the added dimension of international locations.”

Pfaltz remarks, “This body of work reflects the influence of fashion advertising and explores my influences in early modernism and of multiple compositions within one frame.”

Pfaltz has had numerous shows in different galleries and is currently enrolled in the Hallmark Institute of Photography with plans to pursue a career in commercial photography. The exhibition will remain in place through the summer.