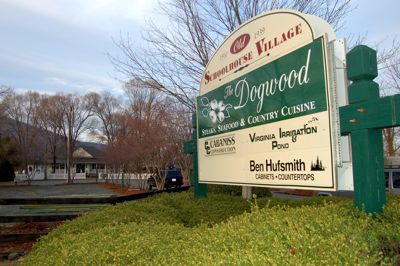 Updated 1.29.08
NCL has confirmed The Dogwood in Nellysford will open Monday February 4, 2008 for lunch.

See you there!
NCL

It appears the ongoing saga of getting The Dogwood open, Nellysford’s newest restaurant, is about to end. As we have been updating you over the past year or so, the owners of the already established and popular Dogwood Cafe in Amherst are finally getting the doors of their Nelson restaurant open.

I spoke with Dennis Hunt Wednesday afternoon and all he is now waiting on is a final walk through by the health department. The regular local inspector has been off for a couple of weeks and they are just now getting someone else from that agency to come out and give them the thumbs up. Dennis said it looks like they will be opening about a week from this coming Monday. That would put opening on February 4th.

A new billboard sign has been installed in front of the restaurant just below their regular sign that will have definite opening details over the coming days, so be sure to check it out from time to time for the exact date.

We know these guys have had setback after setback over the past 18-24 months and wish them the best on getting open!

Dennis says they will start with a limited lunch menu first, (he says only 20 items or so – that doesn’t sound limited to me, that sounds great!) expanding to dinner shortly thereafter, and opening for breakfast as warmer weather arrives after the winter season. I know folks will be excited about the breakfast too Dennis!