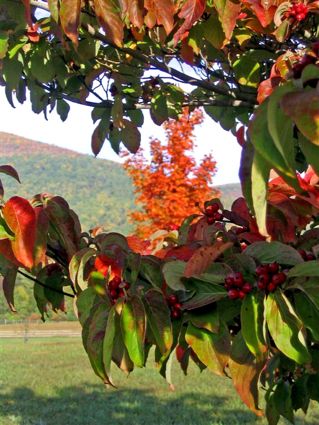 Finally you can see Fall taking hold across all of Central Virginia and Nelson. Thanks to Steve Ellis who sent us today’s weather picture. Rich Fall colors with lots of berries. You know Fall is finally here. Believe me winter is not far behind!

Monday was a tranquil day as we depart from the warm late fall weather. Overnight we saw showers scattered showers across the area, but no particular area saw any real significant rainfall. Colder nights are ahead and even a mention of snow flurries in the forecast for the higher elevations on Tuesday as a cold front pushes through. The remainder of the week looks much cooler until early next week when temps rise to the low 60’s on Monday. Expect gusty winds over the next 24 to 36 hours as the fronts moves east away from Nelson. Some areas can expect gusts as high as 30 MPH.

The current national forecast map shows a cold front over Central Virginia now moving east toward the Atlantic. Behind the front expect sometimes gusty WNW winds with clearing skies and colder temps at night.
Map updates daily by 5:10 AM Eastern

Out 48 hours the cold front is well east out in the Atlantic with clear skies and fair weather for Central Virginia.

Your local forecast including: Martin’s Store, Avon, & Ivy
*Today Early morning showers then partly sunny by 12 noon. Much cooler and windy.
*Valley : High temps near 56Â°
*On the mountains above 2000 feet along the BRP, Montebello, Wintergreen, Devil’s Knob, and Love, AM snow / rain mix possible then clearing and windy. Little to no snow accumulation possible.
Highs around 42Â°
Winds: W 15-25 with gusts to 30 MPH by afternoon

Tomorrow Mostly sunny and continued breezy from time to time.
* Valley: 55Â°
*On the mountains – near 42Â°
Winds: NW 10-20 MPH diminishing by afternoon

The remainder of the week looks generally sunny and cool – Daytime highs mostly low and mid 50’s valley – on the mountains low & mid 40’s – Overnight lows – low & mid 30’s valley & mid & upper 20’s mountains. There is a slight chance of showers and a snow / rain mix in the mountains by Friday into Saturday.

Have a great Tuesday, remember to vote & leave no chad hanging!