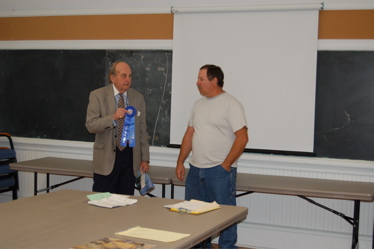 Above, William Layton of Tyro, is honored by Bernie McGinnis of the Nelson Historical Society for his winning of the largest pumpkin in the state. William is the cover story in the current October issue of NCL. You can read more about him here in our online edition. William gave one of the blue ribbons he won at the state fair to the historical society for preservation in the Oakland Museum. 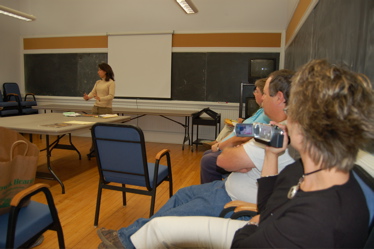 Above, Yvette, talks to the group about the story she prepared in NCL on William, Shelia, their kids. All of the pictures NCL took, published and unpublished, have also been donated as part of a permanent visual record.

Here, a very proud wife, Shelia, videos William as he speaks to the historical society group.

Weatherwise Monday was pretty much a non event. We started off chilly. The overnight low here at NCL-Greenfield Afton was in the upper 30’s. As the day wore on, temps warmed up nicely. A high thin overcast we talked about yesterday formed, but not enough to block any sun, just kind of put a veil on things. Today and tomorrow look about the same temperature wise with afternoon highs near 80 in the valley. We’ll continue to see high thin clouds again today, even cloudy skies at times in the afternoon as an upper level disturbance nears the area. Models still show chances for rain forming by the end of the week, but they have for the past two weeks only to fall apart as it nears the Blue Ridge. This is still 3-4 days out, so I’ll continue to watch and see.

On the National Forecast Map, high pressure again is the dominate feature today. Though a jet stream disturbance will thrown some clouds into the area from time to time today. Rain is in the forecast by week’s end if the system headed our way stays together.