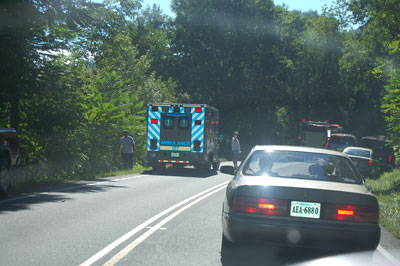 View of Backup from Rt. 6 South. Wrecked car is in ditch near where the ambulance is.

We had the person who found Ms. Hamlett’s accident e-mail us this morning he says:

Subject: Sally Hamlett
Date: September 16, 2007 8:56:49 AM EDT
They wrote:
I was the second person to arrive on the scene and made the 911 call. It
appeared that she drove off the road without applying her brakes.”

The person went on to say that he didn’t notice any blood at the scene and noted the position of the body.

NelsonCountyLife.com can report the accident scene on Route 6 near 151 was a fatality. According to, Trooper Hunter Birckhead of the Virginia State Police, a car was noticed down an embankment near the intersection this morning. Trooper Birckhead says 52 year old, Sally Rogers Hamlett, of the Faber Nellysford area near Martin’s Store was killed in the accident that apparently occurred sometime around midnight Friday night, but was not discovered until Saturday morning when someone saw a reflection off of the car down an embankment.

“A resident living nearby said they heard a screeching sound of tires around midnight. When they looked out they didn’t see anything. That was because the light on the car had all been knocked out when the car hit a tree after leaving the road,” says Birckhead. Birckhead went on to say that the person who heard the screeching assumed the driver of the car either swerved or braked to miss something, then kept on driving since they couldn’t see anything after the screeching sound.

The Virginia State Police continue their investigation into the exact cause of the wreck.

Earlier Post from Saturday morning:
Just before 10:30am, area crews responded to an accident on the northbound side of Rt. 6, just south of Rt. 151 at Martin’s Store, slowing down north and southbound traffic on Rt. 6. No word if any other vehicles were involved. We’ll have more info as details become available … 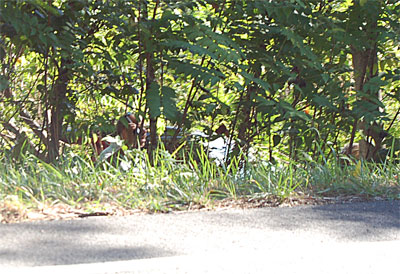 You can barely make out the car and a man, presumably a rescue worker, in the ditch on the northbound lane of Rt. 6 at Martin’s Store. 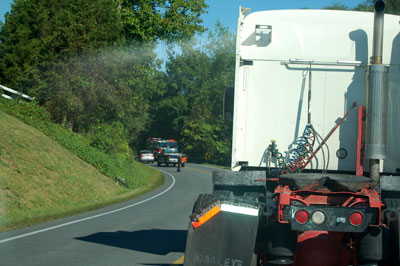 View of backup from Rt. 6 North. This stretch of Rt. 6 sits in between Erlach on the left, and the Whitley’s farm on the right.