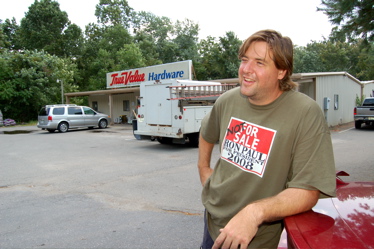 OK, if you know Nelson County Life Magazine, you know we don’t do politics. Far from it. However, we couldn’t resist this shot of Danny Watson outside of the hardware store the other day. Danny, who usually shies away from politics too, was seen wearing the official Ron Paul T-shirt and has the bumper stickers everywhere! He tells us he’s got the stencil on order and is doing a walk next weekend! So which isle are the light bulbs on?

Tuesday was a pretty good day all around. We had clouds and cool temps the first half of the day, followed by warm and humid conditions in the afternoon. Thunderstorms, some severe, moved in for the late afternoon. More or less the north end of the county went without rain and the folks from Brent’s Mountain south got the better rainfall. Glad they got some rain, it has been very, very dry down that way!

Wednesday into Thursday morning will be a transitional day for Nelson. We’ll start out cloudy in many parts of Nelson with partly cloudy skies by afternoon as the stationary front in our area begins to move north and eventually dissipate.

The numbers as of 11:59 PM EDT Tuesday night

A stationary front continues to situate itself over the area for the next 24 to 36 hours. As long as it’s in the area, look for variably cloudy skies and chances for scattered showers and drizzle, especially this morning.
Current-Sat Surface Map

The National Forecast Map shows the boundary holding on for most of the day today into tonight. By Thursday it works northward eventually washing out leaving southern high pressure in control. This will increase our humidity and temps for the end of the workweek into the first part of the weekend.
Today’s Forecast Map