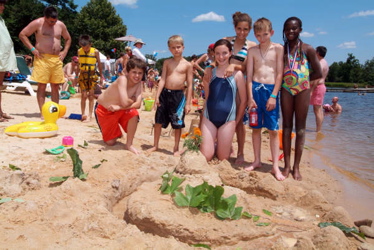 Monday was about as perfect a day weather wise that you could find. A great day to build sand castles like the ones NCL photographer, Paul Purpura, caught at Lake Monacan Monday afternoon. You can see more of the neat pics by clicking here.

NCL-Nelson County Life Magazine in Greenfield we reached an afternoon high of 81 degrees at 3:41 PM. We have been cool the last coupe of mornings dropping to 55 degrees both Monday & this morning. Over on Hickory Creek at NCL-Delfosse Winery, Claude’s station reported and afternoon high of 79 degrees at 4:45 PM Monday afternoon.

On the current surface map high pressure to our north continues to control the weather, but is losing its grip over the next day. Partly cloudy skies will be the order for Tuesday, but a disturbance this afternoon may throw mostly cloudy skies our way late. Local satellite shows some clouds moving our way from the NW. Though I am not confident they will make it here, we’ll just have to see.
Current-Sat Surface Map

On the National Forecast Map, the high moves east this afternoon allowing a more southerly flow. At the same time a warm front will move over our area from the south tonight bringing in higher dewpoints making the air feel more muggy by the 4th, and increasing chances for thunderstorms.
Today’s Forecast Map

The Storm Prediction Center has us near the slight risk area for severe weather on the 4th of July. Though I think the chances are best Thursday as a cold front gets closer, and gives us a better chances for more organized thunderstorms.
Wednesday Severe Outlook

*Today Mostly sunny this morning, partly cloudy skies this afternoon. A very slight chance of an isolated thundershower, best chance on and west of the Blue Ridge Parkway.
*High temps in Nellysford, Massies Mill and Schuyler 81 degrees.
*On the mountains above 2000 feet along the BRP, Wintergreen, Three Ridges, Devil’s Knob, and Montebello, partly cloudy with an isolated aftern shower or thundershower. Highs top out around 75 degrees. Winds S 5-10 MPH.

*Tonight partly cloudy with a stray shower ending after dark on the mountains.
*Lows valley near 60 degrees.
*On the mountains overnight lows of about 52.
*Winds S 5-10 MPH.