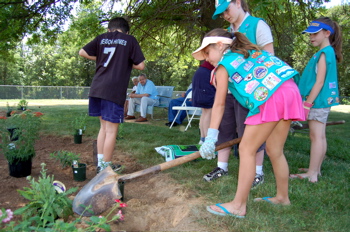 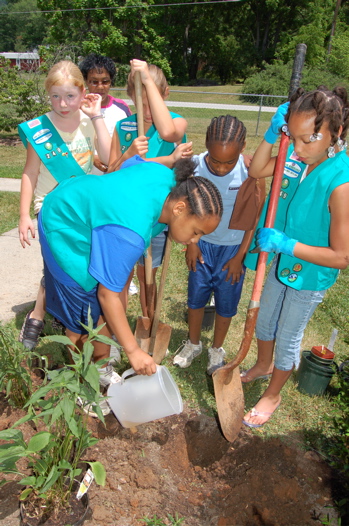 What a great weekend we had across Nelson County and Central Virginia! Up front and first we want to send out kudos again to the Nelson County High Governors, soccer team. These guys did a great job and barely missed being the champs! There’s lots of coverage here by simply scrolling down to our coverage from the weekend. Or just search soccer in the box to your upper left. Yvette was there all weekend and will be putting together some really nice stuff over the coming days!

Above in today’s pictures, Girl Scout Troop 249 from Roseland was out putting in some beautiful plants for folks at the Johnson Senior Center in Roseland and Lovingston. We’ll have lots more on what and why they were planting in our upcoming July issue of NCL.

After a few light showers overnight in Nelson, this week promises to be a milder week than last. We reached temperatures near 100 on Friday, but we won’t see any of that this week, though we’ll warm to near 90 again by the weekend.

On the current surface map below, high pressure to the north and NE brings in low level moisture. A series of upper level low pressure systems march over our area during the next 36 hours keeping chances for scattered afternoon thundershowers in the forecast.
Current-Sat Surface Map

On the National Forecast Map, a low pressure system to our northeast maintains its strength for at least a day or so along with NE high pressure bringing down milder air with low level moisture. This combines to continue chances for scattered thunderstorms in the afternoons through at least Wednesday.
Today’s Forecast Map

*Today Mostly cloudy this morning, with partly cloudy skies in most areas by noon. Scattered thundershowers possible in about 40% of the area by afternoon.
*High temps in Roseland, Lovingston and Shipman 83 degrees.
*On the mountains above 2000 feet along the BRP, Wintergreen, Humpback Rocks, Devil’s Knob, and Montebello, partly cloudy with scattered t-showers late afternoon. Highs top out around 73 degrees. Winds W-5 MPH.

*In the extended outlook
Tuesday partly sunny slight chance of an afternoon thunderstorm. High 80 valley – 74 on mountains.
Wednesday partly cloudy, scattered afternoon thunderstorms. Highs around 80 valley around 75 mountains. Overnight lows generally in the upper 50’s. The remainder of the week looks generally dry with partly to mostly sunny skies by week’s end and temperatures nearing 90 by next Sunday.

We’ll have lots more new stuff posted today, so be sure to check back in, but until then……