The first named tropical storm of the official season is working its way around the gulf area. It may have some effect, mainly clouds, on our weather late Sunday into Monday. All depends on the track right now. Effects will be very, very minimal if any at all. Here’s what National Hurricane Center predicts so far of Sat AM: 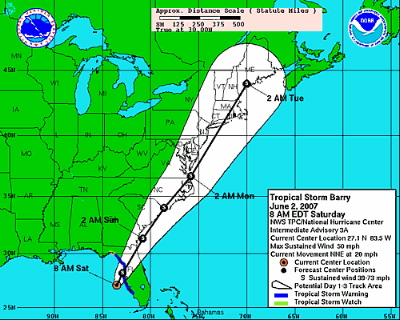 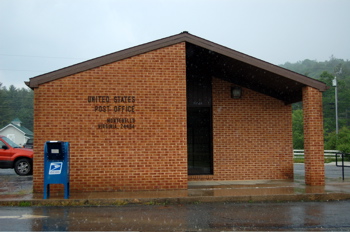 Thursday was another hot day across Nelson County and Central Virginia. Few people saw any rain yesterday, but when I was dropping off the new issue of NCL at Montebello they were having a pretty good thundershower. You can see in the picture above, it was raining. Some adjoining counties were under severe thunderstorm warnings late in the day, but no real damage was reported. I even noticed pea sized hail hitting the windshield at Montebello heading back down 56. Back at the foot of the mountiain in Tyro, not a drop! So goes the summer type afternoon thunderstorms.

Just a passing note, we don’t tend to hype it as much here as the media guys we once worked for do. Today marks the official start of hurricane season. We actually believe something ought to be taking place before making it out to be a crisis. When it actually begins to take place we’ll have plenty to say.

Thursday evening we saw lots of scattered t-storms but again most people didn’t see rain. However, portions of Nelson saw heavy downpours just before dark. We spent the evening just over the county line in Covesville. Rick & Sarah Ovenshire invited us up to have supper at their Coveville Store. They even have their their own superduper weather station in “downtown metro” Covesville. You can check them out here. Great food, nice night, and no severe weather thankfully!

On the National Forecast Map, high pressure holds on & muggy conditions prevail. Thunderstorms refire this afternoon. Over the weekend we’ll see plenty of sun, but more organized thunderstorms move in Saturday night through the start of the next work week.
Today’s Forecast Map

Saturday mostly sunny, high 85-87. On the mountains look for afternoon highs around 80. Can’t rule out an isolated thunderstorm Saturday, but they will be widely scattered. The extended forecast shows more clouds than sun Sunday with daytime highs of 83 & overnight lows generally in the 60’s.A tad cooler mountains. On Monday thunderstorms continue with mostly cloudy skies and temps in the mid 80’s for daytime highs and lower 60’s – upper 50’s mountains. By Tuesday morning we cool to the mid 50’s for lows.

Have a great Friday and weekend!