As I predicted in my earlier post today, the guys at NWS in DC / Sterling finally decided it was time to issue a high wind warning for tonight beginning at 8PM EDT until 2PM EDT Tuesday morning. I have no idea why these guys never saw the same data I was looking at earlier and issued it then. Like I said those guys in Blacksburg know their stuff and I agree with them about 90% of the time. Ashamed they don’t forecast for our county.

Ok here’s the actual High Wind Warning that extends from roughtly Warrenton south through Nelson and on down:

THE NATIONAL WEATHER SERVICE IN STERLING VIRGINIA HAS ISSUED A
HIGH WIND WARNING…WHICH IS IN EFFECT FROM 8 PM THIS EVENING TO
2 AM EDT TUESDAY.

AS LOW PRESSURE RAPIDLY STRENGTHENS OFF THE MID ATLANTIC
COAST…STRONG NORTHWEST WINDS WILL DEVELOP ACROSS THE REGION. WINDS
WILL INCREASE LATE THIS EVENING AND THROUGH THE OVERNIGHT HOURS.
BY MONDAY MORNING SUSTAINED WINDS OF 25 TO 35 MPH WITH WIND GUSTS
TO 60 MPH ARE EXPECTED. LOCALLY HIGHER WIND GUSTS ARE POSSIBLE
OVER HIGHER TERRAIN. THE STRONG WINDS WILL CONTINUE INTO MONDAY
EVENING BEFORE DIMINISHING.

A HIGH WIND WARNING MEANS A HAZARDOUS HIGH WIND EVENT IS EXPECTED.
SUSTAINED WIND SPEEDS OF AT LEAST 40 MPH OR GUSTS OF 58 MPH OR
MORE CAN LEAD TO PROPERTY DAMAGE.

This system is of some concern since we have had over 24 hours of a soaking rain. Not flooding in most places, but soaking. So shallow rooted or brittle trees will have no problem being uprooted in that kind of wind. Good news it begins to settle a bit by Tuesday morning.

Generally speaking rainfall totals have been around and inch to an inch and a half over the past 24 hours. Here at NCL-Nelson County Life Magazine we have had .69″ of rain since midnight today. NCL-Wintergreen Nature Foundation on Devil’s Knob has had 1.02″ of rain since midnight. At the foot of the mountain at NCL-Wintergreen Winery in Beech Grove they’ve had 1.26″ since midnight. Overall since the rain begain the totals have been just around the 2 inch mark. We even had a clap of thunder this afternoon and some pea sized hail was reported at Wintergreen Mountain at Three Ridges by Paul Purpura, one of our NCL photographers.

As you can see in this picture taken at Spruce Creek behind Sue Bernard’s gallery, the creek was running swiftly from all of the rain:
Photo by: Yvette Stafford – Nelson County Life Magazine 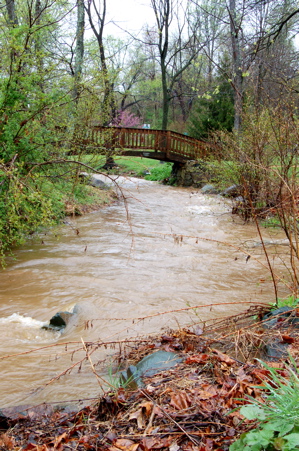 Sunday night look for those winds mentioned above to begin picking up. By early evening before midnight they should easlily be kicking up toward the 30 MPH mark and gusting to over 50+ MPH after midnight. We could also see snow showers as temps cool, especially mountains. Lows valley around 35 degrees mountains about 32 to 33 degrees.

Monday continues to be very windy with similar conditions. Remember on the mountains wind velocities increase beyond those speeds as they rush over the ridges.
It will be partly sunny with a scattered shower and temps in the mid 50’s valley and low 40’s mountains with some snow showers there. Clouds roll in from time to time thoroughout the day as this system moves away. Monday night winds continue with partly cloudy skies and temps in the mid 30’s a passing shower is again possible.

By Tuesday winds begin to subside and temps start moderating. Temps reach near 70 on Saturday and the lower 70’s by Sunday. There is a chance of scattered showers on Thursday, nothing major.

Have a great Sunday night and Monday morning. Hold on to your hat!
Tommy