This is the first entry on my weather post at our new NCL website. Some of you know I made my living for about 10 years doing television reporting & weather back in Tennessee and the mid-south before Yvette and I moved here to Virginia / Nelson County. After being a cop and running for sheriff, you have seen that by now! I went into television news and was a reporter for a number of years. I eventually moved into doing weather for the CBS & NBC affiliates in Memphis. 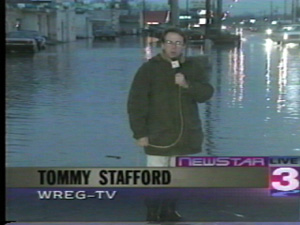 This is courtesy of WREG-TV Memphis when I was doing a live satellite shot of flooding on NW Tennessee in the mid 1990’s. I think this was about 1995 or 96. 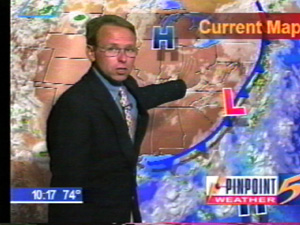 Later in 1997 I moved to the NBC affiliate, WMC-TV 5 and did reporting as well as weather there. This picture is courtesy of WMC / Raycom Media. – Though I never got a meteorology degree I always had a deep interest in weather. In 1980 I became a licensed airplane pilot and then in 1982 a helicopter pilot. That made me want to learn lots about weather. From then on I learned all I could about it. Though I must admit even as a youngster back on the farm in W TN I loved to watch thunderstorms and see what the weather was going to do. 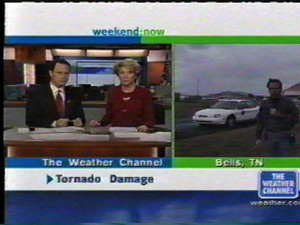 Later on as I became more skilled in weather and my on-air presence I got the chance to do live shots via satellite for Weather Channel out of Atlanta. I freelanced for them, and pretty much became the “go to” guy for weather events in the mid-south and roughtly a 200 mile radius. from the later 90’s till 2004. The above picture was from a shot I did in late 2001 from a Crockett County, TN tornado scene. This picture is courtesy of The Weather Channel / Landmark Televison, Inc.

Ok, enough about the background. I will be sharing more about what I did in the past, more pics and video, and who I am, but for now let’s concentrate on the weather at hand.

What I hope to do in simple terms is explain what the weather should do here in Nelson County. As we said in the April issue of NCL, it’s a whole different ballgame here vs DC, Waynesboro, or Charlottesville.

Tuesday will be near perfect day. Look for temperatures to rise around 80 for just about everyone except on the mountain at Wintergreen where you’ll see temps around the lower 70’s. As I type this post Tues morning they are showing lower 80’s but I think that’s an error due to direct sunlight on the sensor. I’ll be changing that this afternoon as Josh Palumbo with TWNF and I put a solar shield on that particular station

Tonight will continue to be mild as clouds stream into the area in advance of an approaching system. To our west over TN – severe weather is setting up near my home area of NW-TN. By the time it gets here tomorrow after midnight, I don’t think we’ll have the severe weather here. A rumble of thunder perhaps, but that’s about the brunt of it. Showers will linger into Wednesday morning before sun works its way into the area by afternoon. We make it to the upper 60’s on Wednesday before hitting the lower 30s in the valley Wednesday night. On the mountain you should easily make the freezing mark. But hold on you “ain’t” seen nothing yet! The real changes are coming on Thursday!

Daytime highs Thursday only make the mid-50’s at best and lows that night in the valley hit around 25…yes, cover or bring in the plants! Friday look for lower 50’s and Saturday around 50, maybe. I am thinking positive! – but it will be hard to get the nature’s heater plugged in over the coming days. Over night lows will be in the lower 20s as we near Saturday. And yes that is in the valley, up above on the mountains, get your long johns out boy! How’s 10-15 degrees a couple of nights suit ya!

Thankfully we begin to moderate a little as we head into next week, but this blast of Canadian air coming later this week will remind us – it’s spring – not summer, not just yet! – But just remember this can’t last long and those 80 degree days will be back before you know it!

And before signing off this, remember on our main NCL weather page or in the upper left hand corner of any of the NCL’s web pages you can always get real LIVE weather conditions for any of our stations in the NCL Weathernet / Weather Underground network. Give them a test drive.