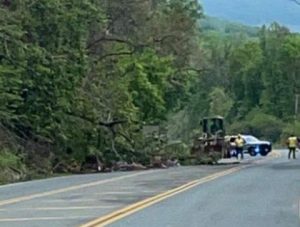 Photo By Justin Craig : A major rockslide blocked Route 250 just west of Route 151 on Afton Mountain in early May 2021. The road reopened to traffic on Wednesday – June 30, 2021 after a lengthy closure.

U.S. 250 (Rockfish Gap Turnpike) reopened to traffic this afternoon, almost eight weeks after it was closed due to a rock slide and slope failure between Route 151 (Critzers Shop Road) and Route 6 (Afton Mountain Road). The project was finished two weeks ahead of the forecast mid-July completion date.

With the reopening of U.S. 250 traffic patterns have returned to normal and the through truck ban on Route 6 remains. Tractor-trailer trucks are prohibited on Route 6 unless they are making a local delivery. The Virginia State Police and Nelson County Sheriff’s Office will continue patrols in the area to enforce the tractor-trailer restriction.

Contractors with the Virginia Department of Transportation worked six days a week to repair the area that failed above U.S. 250, removing loose soil, trees and rocks to make the slope stable. The work was done in stages since a flat area called a bench had to be created at each level so the excavators and soil nail equipment could work in the area above the bench. More than 700 large off-road dump truck loads of material were removed from the slope and trucked to a disposal area.

The soil nail operation, in which long rods are drilled into the slope and secured with cement, followed the removal of loose material at each level. In all, 350 soil nails were placed. Once the nails were placed the area was covered with a mesh similar to chain-link fence, which was secured to the nails. The 21,000 square feet of mesh – about one-third the area of a football field – helps to stabilize the slope as vegetation is reestablished. In a final step to stabilize the slope the area was covered with a mixture of grass seed and straw to provide ground cover.

During the initial survey a second, smaller section of potentially unstable slope was found near the main slide area. The project team took advantage of the road closure and equipment on site to stabilize that area, which measured about 100 feet wide by 25 feet high.

The successful completion of this project was the result of cooperation between multiple agencies, including VDOT, the Virginia State Police and the Nelson County Sheriff’s Office, as well as Nelson County officials. Three VDOT districts, Culpeper, Lynchburg and Staunton, as well as VDOT’s Northwestern Regional Operations group, contributed resources to the project.

Public outreach and traffic enforcement was coordinated among those agencies, including:
● Additional signage, including digital message boards, on Interstate 64, U.S. 29, U.S. 250 and other locations.
● Increased Virginia State Police presence, including truck restriction citations.
● Increased presence of the VSP Motor Carrier Safety Team.
● Patrols by the Nelson County Sheriff’s Office to increase law enforcement presence in concert with the State Police.
● Use of an unmanned portable radio that broadcasted to CB radio frequencies to advise of truck restrictions on Route 6.
● Use of cameras and traffic classification counters that monitored traffic volumes and vehicle types.
● Communication with the Virginia Trucking Association and commercial motor vehicle carriers and trucking companies about the truck restriction on Route 6.

Current traffic conditions and other real-time travel information can be found on the 511 Virginia website, the free VDOT 511 mobile app or by calling 511 from any phone in Virginia. VDOT updates are also on Facebook and the district’s Twitter account, @VaDOTCulp.