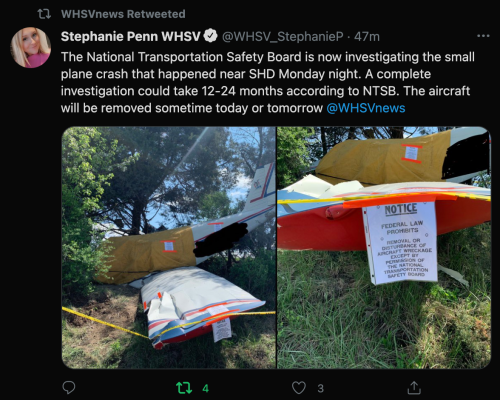 Virginia State Police Trooper J.M. Cappo is investigating a plane crash that occurred at 7:08 p.m. on April 12 in Augusta County.

A Piper PA-28-140 was conducting touch-and-go landings at the Shenandoah Valley Regional Airport in Weyers Cave. As the small aircraft was attempting to land, the pilot’s controls became unresponsive which caused the plane to drift left. The plane caught a limb and then struck several trees just outside the airport property.

The FAA and NTSB were both notified. The crash remains under investigation.

Updated post 4.13.21
Early Tuesday morning we told you about a Monday night plane crash near the airport in Weyers Cave. (See original VSP release down below)

WHSV Reporter Stephanie Penn says NTSB now has the ball and will be conducting the investigation.

The National Transportation Safety Board is now investigating the small plane crash that happened near SHD Monday night. A complete investigation could take 12-24 months according to NTSB. The aircraft will be removed sometime today or tomorrow @WHSVnews pic.twitter.com/shJsFDRz8E