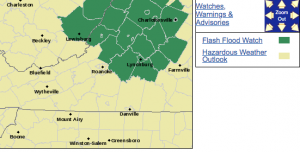 A Flash Flood Watch is in effect from noon Sunday into Sunday evening for the areas highlighted in green. Click on the image above for the absolute latest updates from NWS.