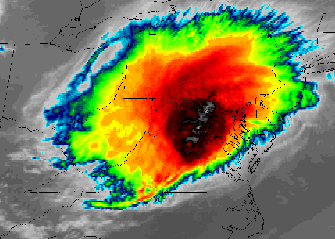 The post below is our original coverage when the Derecho hit Nelson County and most of Virginia on June 29, 2012.

One we will never forget!

Below is an outstanding animated satellite image of the damaging derecho thunderstorm complex as it moved out of the midwest and straight for Virginia. It is truly illustrative as to how powerful and massive this storm was.

Nelson EMS Director Jaime Miller tells us her dispatch center was told by CVEC that crews would not come out until 5AM at the earliest. It appears as of this post at 1:20 AM Saturday that the online CVEC companion site showing outages has not been updated to reflect the total outage status. “Our biggest concern right now is making sure people use extreme caution around downed power lines. There are so many down across the county and we have seen people driving over them in some instances.” Miller told us early Saturday morning.

Original Post at 11:23 PM Friday evening June 29, 2012
We are in the dark here tonight at NCL filing this story from our iPhone. As best we can tell everyone in the county is without power and so many trees are down we can’t begin to give the number. Sarah Shelton the manager at Basic Necessities in Nellysford said she counted at least 10 trees or major sized limbs across 151 between their restaurant and Lodebar.

The storm system was not a tornado, though it produced damaging winds that are certainly similar in many respects. The meteorological term is derecho. From NOAA and the NWS:

A derecho (pronounced similar to “deh-REY-cho” in English, or pronounced phonetically as “”) is a widespread, long-lived wind storm that is associated with a band of rapidly moving showers or thunderstorms. Although a derecho can produce destruction similar to that of tornadoes, the damage typically is directed in one direction along a relatively straight swath. As a result, the term “straight-line wind damage” sometimes is used to describe derecho damage. By definition, if the wind damage swath extends more than 240 miles (about 400 kilometers) and includes wind gusts of at least 58 mph (93 km/h) or greater along most of its length, then the event may be classified as a derecho.

You can read more about derechos here.

Here at NCL in Greenfield we have numerous treetops down on the front of the office.

Elsewhere in the county just east of Lovingston people were trapped in a home where a tree fell on their house.

Nelson EMS Director Jaime Miller tells us that emergency shelters were opened in both Roseland at the rescue squad and in Lovingston at the firehouse to give people a place to stay that couldn’t make it home.

Greg Kelly with Central Virginia Electric tells us hey are making an assessment now. He tells us it will be a large task making that assessment since so many trees are reported down.

We will update here as often as possible. We are efforting our backup power now and will be back up with all computers soon.