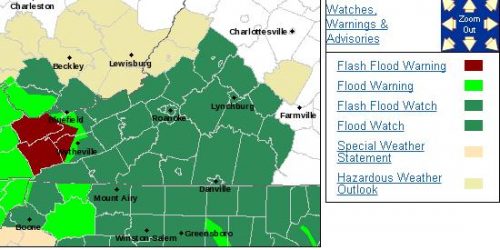 The original flood watch for the southern tier of counties has been replaced and extended by this one.

…Expect periods of heavy rain this afternoon through Monday…

.Slow moving storm system will track from the Tennessee Valley
to east of the North Carolina coast by Tuesday. Anticipate plenty
of rain to progress into to the region in advance of this system
which will allow for a prolonged period of rain, which may be
heavy at times Monday.

The National Weather Service in Blacksburg has expanded the

* Moderate to heavy rain will take place, with around 2 inches
likely tonight through Monday night. Locally higher amounts
likely near the crest of the Blue Ridge.

* The duration and widespread nature of the heavy rainfall is
expected to result in rises and potential flooding on area
streams. Additionally, heavier short term rainfall rates
associated with bands of heavy rain showers could result in
localized flash flooding along small streams and in urban areas.
Saturated ground may also result in downed trees and rock or
mud slides.