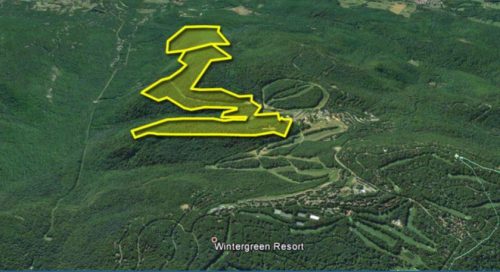 A 382+ acre property near Wintergreen Resort, and linked to former owner and coal magnate Gov. James C. Justice of West Virginia, is scheduled to be put on the auction block this month.

According to an online listing by auction company Tranzon, LLC, tours of the property for prospective bidders are scheduled for April 6, 13, and 20. Bidding for the property opens April 10 and closes April 27. https://www.tranzon.com/FX1871

According to the information packet, the property “is encumbered by a Right of First Refusal in favor of the current Wintergreen Resport Owner and Operator (Wintergreen).” That means Wintergreen would have 60 days to exercise that right but “Wintergreen has verbally expressed to Seller that it does not intend to exercise this right, according to the Seller, but Seller is not yet in receipt of a written waiver.” A Q&A portion of the packet addresses the proposed Atlantic Coast Pipeline and refers bidders to reach out to Friends of Wintergreen and the Wintergreen Homeowners Association for more information, and to FERC for information on the pipeline’s likely path.

BRL has reached out locally to Wintergreen’s local public relations department for comment.