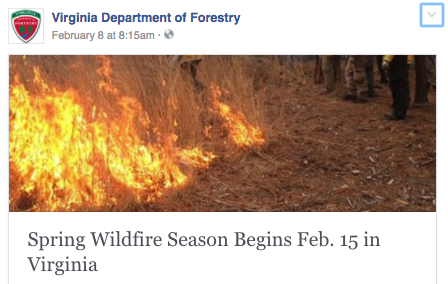 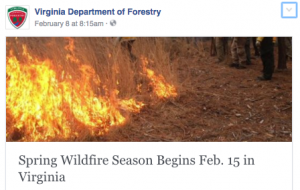 As wildfire season approaches, there is expected to be an increased threat in 2017 in some areas of Virginia due to a lingering lack of rain, minimal snowfall and growth in urban interface areas. More than 60 percent of Virginia’s annual average of 1,000 wildfires occur in the spring – with March and April historically being the most active months.

To help reduce the number of wildfires this time of year, the Commonwealth’s 4 p.m. Burning Law goes into effect February 15. The law prohibits open burning between the hours of midnight and 4 p.m. each day. Burning is permitted between the hours of 4 p.m. and midnight, but officials at the Virginia Department of Forestry caution people that, even though burning is allowed from 4 p.m. to midnight, they not burn if the weather conditions are such that a fire will likely escape. (Such conditions include low humidity, warm temperatures and winds over 10 miles per hour.) The law remains in effect each year until April 30.

“The 4 p.m. Burning Law is one of the most important tools we have in the prevention of wildfires in Virginia,” said John Miller, VDOF’s director of fire and emergency response. “The number one cause of wildfires in the Commonwealth is people burning yard debris and/or trash, and the 4 p.m. law goes a long way toward reducing the risk associated with wildfires each year.”
A violation of the 4 p.m. Burning Law is a Class 3 misdemeanor punishable by up to a $500 fine. In addition to the criminal violation, however, those who allow a fire to escape are liable for the cost of suppressing the fire as well as any damage caused to others’ property.

As the population of Virginia continues to grow, every new home being built in the wildland-urban interface brings new challenges.
Fred Turck, VDOF’s fire prevention manager, said, “While a lot of this new growth takes place in ‘communities,’ we also have a lot of people building in traditionally rural areas. A wildfire can destroy a single home or multiple homes as we saw all too graphically last fall in Gatlinburg, TN. The continued growth in wildland-urban interface areas has led to enhanced collaboration among homeowners, local governments and the Virginia Department of Forestry.”

Using the Gatlinburg wildfire as the most recent example of what can go wrong when a number of factors all align in a negative manner, the Virginia Department of Forestry is reaching out to homeowners, community leaders, fire departments, local governments and state and federal partners with an educational campaign hoping that a well-informed individual or group can make a difference.
Virginians can prepare their properties for the spring wildfire season in the following ways:

* Remove all branches that touch the house, garage, shed, etc.;

* Clear all brush (tall grass, leaves, branches, weeds, etc.) within 30 feet of the home and other structures;

* Trim branches up to 10 feet from the base of the tree and remove any vines from the trees;

* Use gravel or chunky bark for mulch;

* Keep flammable plants away from your home;

* Maintain your driveway so that the clearance is at least 12 feet wide and 12 feet high, and

* Use fire-resistant materials for your roof, deck and siding projects.