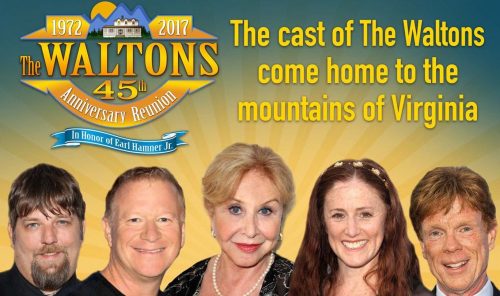 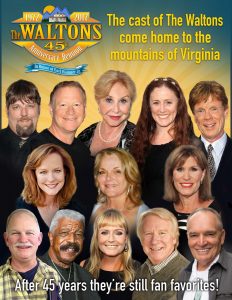 When 10-year-old Mary Beth McDonough was cast as young Erin Walton in the 1971 TV movie The Homecoming: A Christmas Story, she didn’t ever dream of being part of the national treasure that become CBS’ The Waltons. The TV show, which aired from 1971 to 1981, took Mary Beth out of her “valley girl” California life and dropped her straight into the middle of the Great Depression, right here in Schuyler.

Now, 45 years later, Mary Beth and her castmates are gathering at Schuyler’s Walton Mountain Museum to celebrate their fans and remember the man who made the Walton’s Community a possibility – the show’s writer and creator, Earl Hamner, Jr., who died of cancer on March 24, 2016 at the age of 92.

“I love Schuyler and I love Virginia and I can’t wait to see everybody,” said Mary Beth, “We love each other and don’t get to see each other enough. We’re very connected – we talk and email and text – but being together at the same time in the same place is always incredibly special.”

Mary Beth then quickly – and somberly – added that Earl’s presence will be sorely missed.

“Uncle Earl is what he called himself to us. He would call me and say ‘Mary Beth, it’s your old Uncle Earl,’” she said. “We have so many special memories of him. He really molded my life and who I am.”

Michael Learned, who played Olivia Walton, mother to the Walton clan, agrees wholeheartedly with Mary Beth – even if she and Earl had their spats from time to time.

“Earl and I become very dear friends, but at the beginning, i think I was kind of a burr under the saddle because I was constantly challenging him about the role of the perfect mother. Once, I asked him if she ever did anything wrong. He said no,” remembered Michael.

But despite the occasional disagreement, Michael remembers Earl as the man who wrote the teleplay that gave her her start — and managed his fame humbly and kindly.

“I’ll say the usual thing about Earl, which is also absolutely the truth,” she said. “He was a really nice, kind, gentle man with a wicked sense of humor, which made him bearable. Because otherwise he’d be too good to be true.”

For so many people involved with the show, Earl became more than a colleague, but a family member. Whether it was “Old Uncle Earl” to Mary Beth and the other Walton Kids or a father figure to those who worked for him, Earl was always there with a smile and a story to help you get you where you need to be.

“For me, he was kind of like a father figure — he was a mentor,” said Earl’s documentarian, creator of the documentary Earl Hamner Storyteller, and organizer of The Walton’s 45th Anniversary event, Ray Castro.

“A lot of the time I got to spend with him was listening to him,” said Ray. “Listening to his voice and the stories he told. He had some very colorful stories. You always thought of him as the John Boy character, but in reality he was just like everyone else — he had a great sense of humor and was such a joy to be with. I miss him.”

Castro went on to say, “This reunion is about Earl. To honor him. The reunion is March 24-26. Happens to be the one year anniversary of Earl’s death. It’s a celebration of life and how he impacted our lives — not only as fans, but as part of the Walton family and his extended family and that’s exactly how he made everyone feel. The camaraderie we have between fans. It expands to Europe, Canada, Germany, England. Ww have them coming from all over to honor the show and honor Earl Hamner.”

Though the reunion is, in part, to honor Earl on the anniversary of his death, the cast is also looking forward to spending time together and celebrating the 45th anniversary of the show with its fans.

“I’m looking forward to the fact that I’ll see the gang and we’ll all be together,” said Michael, echoing Mary Beth’s hopes for the weekend reunion. “We giggle and laugh and Eric [Scott] tells jokes – terrible jokes – and they’re a really great bunch. We are also blessed with he best fans.”

“We have such loyal fans,” said Mary Beth. “The show is so important and we’ve touched so many people. Their love is amazing and always inspiring.”

According to Ray Castro you will have several opportunities to meet the cast members of The Waltons.

Also on Sunday March 26 of that weekend Michael Learned’s Front Porch Reflections will be held at The Jefferson Theatre from From 1pm-3pm. We are told this is an excellent show! Plenty of seats are still available as of this post.

For the latest updates and additional ticket information visit earlhamnerstoryteller.com