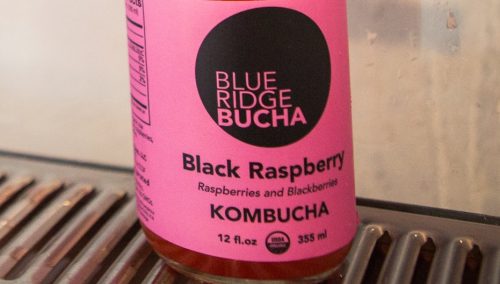 A little over a year ago back in November of 2015 we told you about a challenge by E & J Gallo Wines of California against local kombucha entrepreneurs Ethan and Kate Zuckerman over the use of the name Barefoot Bucha. Fast forward to August 2016, the two companies reached an agreement where Barefoot would change its name.

The new name was selected by running a crowd-source naming contest that received over 500 entries. Says Ethan Zuckerman, Co-Owner of Blue Ridge Bucha, “When we started looking at all the entries coming in, we noticed a distinct pattern: one in five contest entrants suggested Blue Ridge Bucha. This really struck us, because we weren’t asking people to vote on options we presented—we were asking for original entries and a significant percentage of people were submitting the same thing. We also realized that when you search the internet for Blue Ridge Bucha we’re the first few pages of entries that come up—there is already a close association with our kombucha and the Blue Ridge Mountains where we live and brew it.”

Adds his wife Kate, Co-Owner of the company, “We love that our community picked the name—it just feels right given our deep roots here. There were a lot of creative names submitted, but the beverage space is going through a bit of a crisis with trademark litigation right now. That’s definitely not something we want to go through twice and picking a place name gives us certain protections from that. We are also committed to a low carbon footprint, which means we only distribute to a small geographic area in and around the Blue Ridge. The more we thought about it, the more Blue Ridge Bucha became the obvious choice.”

Because so many contest entrants picked the same name, the Zuckermans literally drew a name out of a hat to determine who would receive the grand prize: a year’s supply of kombucha. The winner, who lives in Charlottesville, VA., will enjoy a growler fill each week for a year, courtesy of Barefoot Bucha and Whole Foods Charlottesville.

On Sunday, January 15th, Whole Foods Charlottesville will be hosting a party for the official launch of the new brand. It will take place from 3-5pm. There will be food, live music, and attendees will receive a new 32 oz mini growler from Blue Ridge Bucha. All are welcome.

Blue Ridge Bucha is a family-owned small business that is known for its innovative, sustainable method of getting its product to the market. The company has set up various fountains in Virginia, Maryland, and Washington, D.C., where customers can get fresh, Certified Organic kombucha on draft. Customers buy a bottle, which they then own, and can refill as many times as they want. Since 2010, kombucha drinkers have saved over half a million bottles through the company’s refillable bottle program.